Madrid got the better of Granada, courtesy of two superb strikes from Mendy and Benzema, to head into the final two matchdays of the LaLiga season with a four-point lead at the summit.
Estadio Nuevos los Cármenes

1
2
A ninth straight win and a four-point cushion on the side in second with two games to go before the curtain comes down on the LaLiga season. That's the outcome of Real Madrid's trip to the Nuevo Los Cármenes, where victory was secured courtesy of two superb first-half strikes, from Ferland Mendy and Karim Benzema. The league leagues managed to hold Granada at arm's length when the hosts reduced the arrears as the visitors took a step closer to title glory.

Madrid made a bright start and coped well with the home side's press by putting together lengthy periods of possession before Isco sent in the first shot of the game with four minutes gone. In the 10th minute, the Whites hit the front following Mendy's sublime finish. The French wing-back caught the hosts' backline out with a stunning change of pace to reach the by-line and a belting left-foot strike that flew into the top corner. Zinedine Zidane's charges were hungry for more and conjured up a nicely worked move to make it 2-0. An Isco backheel in the middle of the pitch found Luka Modric, who picked out Benzema and the Frenchman found the net with a right-footed finish from inside the area in the 16th minute.

Granada had chances of their own in the first half, most notably a Domingos Duarte header that Thibaut Courtois kept out. But the team from Andalusia were happy to see the first half draw to a close, allowing them to come out fresh after the break, getting a goal back after 50th minutes thanks to a Darwin Machis strike. The goal didn’t affect Real Madrid and on the hour, Isco tried his luck from the edge of the area, before Marco Asensio and Rodrygo came on as the visitors looked to catch the home side on the break.

League leaders dig in
With the match in the balance and both teams searching for more, the tired legs began to show. In the last five minutes of the contest, Granada had two chances to level things up. First, Antoñin hit off a good shot that forced Courtois into a save and, in the same passage of play, Azeez struck the ball well but Sergio Ramos cleared off the line. The table-toppers held on and dug deep to pick up an important win to set up the chance to be crowned LaLiga champions on Thursday. 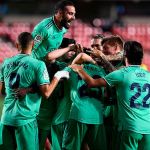