Goals from Benzema and Asensio saw Madrid overcome Alavés to retain the four-point lead at the summit on a night the Whites recorded a fifth successive clean sheet.
Alfredo Di Stéfano

2
0
Real Madrid simply show no sign of letting up. The LaLiga table-toppers saw off Alavés at the Di Stéfano to make it eight wins on the bounce and retain the four-point buffer at the summit with three games to go. The Madrid goals came from Karim Benzema, who converted from the spot, whilst Marco Asensio was also on the mark for the hosts, who recorded a fifth successive shutout.

Ferland Mendy started at left wing-back, with Lucas Vázquez occupying the right wing-back berth and inside the first minute, the pair were involved in the madridistas' first forward foray, which culminated in Luka Modric sending his effort wide of the target. The Alavés response wasn't long in coming and Joselu's headed effort struck the crossbar, whilst Raphaël Varane cleared a Lucas Pérez's follow-up off the line. It looked as if we were in store for a high-tempo affair and just after the 10-minute mark, Mendy once again showed what a threat he is down the left. Ximo Navarro upended the Frenchman in the area and Benzema stepped up to make it 1-0.

With 12 minutes gone, Toni Kroos’ did his best to find the top corner, before a fierce Mendy cross nearly forced Camarasa to turn into his own net on 17’. The Blanquiazules refused to roll over though, with Oliver Burke proving a constant nuisance for the defence and testing Thibaut Courtois, despite the final chances before the break falling to Rodrygo and Benzema. After the restart, referee Gil Manzano retired injured and by the time the 50th minute came around, Madrid had added to their advantage. Benzema and Asensio raced through on goal, up against Roberto, and the Balearic Island-born forward stroked home with ease, though his goal was originally ruled out for offside before being correctly awarded by VAR.

Another clean sheet
The second goal gave way to the best spell of the game for the madridistas, who were linking up effortlessly and enjoying the lion’s share of possession, but neither Benzema, nor Lucas Vázquez, nor Rodrygo could beat Roberto, despite enjoying fine chances with 57, 64 and 75 minutes on the clock. At the back, the team are well on their way to recording their best ever LaLiga campaign (21 goals conceded). Zidane brought on Fede Valverde, Vinicius Jr, Isco, Eden Hazard and Brahim to close out a complete performance by Real Madrid, who now turn their attentions to what will be the decisive week in the league campaign. 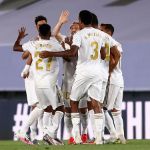