Real Madrid beat Eibar at the Alfredo Di Stefano with goals from Kroos, Ramos and Marcelo in the first match after the resumption of the campaign.
Estadio Alfredo Di Stéfano

3
1
The hotly anticipated return to football has arrived. Fans and players alike were longing for action out on the pitch, even though there were no supporters inside the stadium. The Alfredo Di Stéfano hosted the first Real Madrid match after the LaLiga restart, and the Whites beat Éibar, showing their intention to fight for the league title in each of the remaining matches of the campaign.

Kroos waited just four minutes to open the scoring for Madrid with a fine goal, after almost 100 days since the last match. He guided the ball towards goal with a side-footed strike that sailed into the top corner. Hazard was also was also back in actino and heavily involved in the early attacks for the home side. Éibar looked for a quick reply, but Madrid controlled the game with long spells of possession, until they doubled the lead on the half hour mark. Ramos intercepted the ball in the middle of the park, carried it forward and linked up with Benzema and Hazard, and the Belgian squared it to the captain who turned the ball home to make it 2-0.

With barely any time for Éibar to catch their breath, the third goal came with 37 minutes gone. Hazard weaved his way into the box and tested Dmitrovic, whose save fell at the boots of Marcelo, and the Brazilian all but put the game to bed with a left-footed strike across goal. Rodrygo had the final chance before half-time, and then Zidane opted to bring on Mendy at the break. With 56 minutes on the clock, Edu Expósito forced Courtois into a fine stop. Éibar made three changes at once and they wasted no time making their presence felt. First, Sergi Enrich’s strike came crashing back off the crossbar, before Bigas succeeded in cutting the deficit from a corner (60’) and not long after, Courtois had to be alert once again to keep out a Pedro León effort.

Ringing the changes
Just as Éibar were enjoying their best spell of the match, Bale, Vinicius Jr. and Militão all entered the fray in an attempt to ease fatigue and the physical strain that was to be expected during what has been a bizarre season. Following the final water break, with 15 minutes still to play, Madrid took back control of the game to make sure of their first win following a return to LaLiga action. 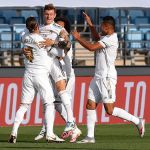