Isco put the Whites ahead, only for a controversial Gabriel Jesús effort, following a foul on Ramos in the build-up, and De Bruyne's spot-kick to turn the scoreline on its head.
Santiago Bernabéu

2
The Santiago Bernabéu tonight witnessed an intense contest in the Champions League last-16 first-leg clash between Real Madrid and Manchester City. Bernardo Silva started things well for the English side, trying his luck in the first minute. City piled on the pressure to force Madrid to be at their best. The Whites turned the screw thanks to the movement of Vinicius Jr. down the left, and he ended up setting up a chance for Varane on 15’ but his finish sailed over the crossbar.

The visitors responded through Gabriel Jesús, who cut through the box and came up against the figure of Thibaut Courtois. On the half-hour mark, came the clearest chance of the game. Ferland Mendy crossed into the box for Karim Benzema  to head the ball downwards, only for Ederson to parry the attempt. Vinicius Jr. tried to rifle in the parried ball, but to no avail. Manchester City showed signs that they were going to snatch a goal before the break, but the combined efforts of Sergio Ramos, Casemiro and Fede Valverde helped the Whites keep it 0-0 after a dangerous corner.

Isco strikes
The English outfit made a very bright start to the second period, with Courtois getting a hand to keep Mahrez's effort out. Madrid hit back and made the breakthrough on the hour mark. Luka Modric regained possession as City sought to break, before he found Vinicius Jr. and the Brazilian slipped the ball to the unmarked Isco, who fired home to make it 1-0.

The opening goal served to spur Zinedine Zidane's charges on whilst Guardiola's troops were visibly rocked. The spaces began to open up and Ramos had a golden opportunity to double the hosts' advantage in the 70th minute. However, football is an unpredictable game and in the space of just five minutes, City turned the scoreline in their favour. The visitors levelled matters in controversial fashion in the 78th minute, when Gabriel Jesús nodded the ball into the net after having fouled Ramos. In the 83rd minute, Kevin  De Bruyne converted from the spot as City completed the fightback. Real Madrid, who ended the game with 10 men after Ramos received his marching orders on 86', will now look to stage a comeback in Manchester. 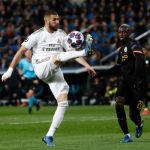