Marcelo, Rodrygo and Nacho got the Whites' goals, but they were knocked-out of the Copa del Rey to Real Sociedad.
Santiago Bernabéu

4
Real Madrid fought until the final seconds in their attempts to turn the result in their favour, but ultimately, they came up short and were knocked out of the Copa del Rey in the quarter-finals by Real Sociedad, with the hosts having trailed 4-1 at one stage, to bring their 21-match unbeaten run to an end. Real Sociedad went in front with what was their first real shot on goal. In the 22nd minute, Isak shot from range, Areola parried well, but Odegaard's follow-up struck Militão and deceived the goalkeeper.

Real Madrid then enjoyed two fine chances to level things before the break. The first fell to James. His effort from the edge of the box on 35’ forced Remiro into a superb diving save. With 42 on the clock, after god work by Vinicius Jr., Remiro was again alert to keep out Marcelo's volley. Two minutes later, as the madridistas poured forward, Isak shot over the bar when one-on-one with Areola.

Second half
Things took a turn for the worse on 54' when Isak, who had seen a goal ruled out for offside in the 49th minute, fired the ball past Areola after having been played in by Barrenetxea. However, the night was to still to get even worse for the LaLiga table-toppers, who conceded a third, with Isak once again on the mark. Real Madrid reduced the arrears in the 59th minute, when Brahim found Marcelo, who rifled the ball home, beating the La Real custodian at his near post. The hosts came close to scoring a second of the night five mintues later when some sublime individual play from  Vinicius Jr. saw him evade the attentions of Gorosabel and Oyarzabal, before he contrived to send his effort wide of the upright. In the 69th minute, Merino struck Real Sociedad's fourth goal of the game.

Madridistas keep plugging away
There were now 20 minutes left on the clock and on 79' Vinicius Jr. headed home to make it 4-2 to the visitors, only to see his effort chalked off following a VAR check. Two minutes later, Rodrygo had the ball in the back of the net following a Vinicius Jr. pass and this goal did stand. In injury time, Nacho sparked hope of a comeback amongst those inside the Bernabéu as he powered home a towering header from Benzema's cross. A minute later, Real Sociedad were reduced to 10 men after Gorosabel was given his marching orders. However, no further goals were ultimately forthcoming. 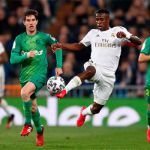