0
Real Madrid got the better of their city rivals in a hotly-disputed derby clash to take three huge points in the battle for LaLiga. The league leaders produced another exhibition in solidity to increase their unbeaten run to 21 games, the last three with clean sheets to boot. The victory was the result of a fine second half for the Whites after the first period had ended goalless. The hosts were the first to try their luck, when Kroos played a swift one-two with Carvajal from a corner on 11', before whipping it across to Ramos on the penalty spot, but the captain headed over.

Atlético's response came seven minutes later. Vrsaljko sent the ball into the box and Courtois was more than equal to Vitolo's effort on goal. The visitors were pressing on now, but they came up time and again against the best back line in Europe's top five leagues. Saúl's shot from the edge of the area with 19 minutes gone flew just wide of the madridista goal and five minutes later, Correa had an even better chance to net the opener. The Argentinian forward ran in from deep and his shot across goal came back off the upright. In injury time, Modric took on a long-range effort but the ball ended up in Oblak's gloves.

Zidane made a double change at the break. Vinicius Jr. and Lucas Vázquez substituted Kroos and Isco. The Brazilian was key in the first goal of the game. His beautiful pass with his back to the defence on 56’ was pounced on by Mendy, who sent a curling first time cross to Benzema, and the Frenchman was waiting to plough the ball straight into the back of the net.

Those were to be the best minutes for the Whites, as Vinicius Jr tried to double the lead on 64’. He took the ball on and worked his way skilfully into the box before blasting a shot into the waiting arms of Oblak. The result tells the tale of a tight and even game, but from that moment until the end the madridistas were solid in defence and hardly gave away any chances to their local rivals. Real Madrid pick up the points and move on to the next challenge. 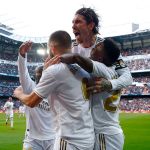