4
Real Madrid showed their hunger to win the Copa del Rey yet again. The Whites saw off Zaragoza to book a place in the quarter-finals. They showed concentration from the off and maintained real pressure throughout. The team went ahead in just six minutes. The first goal came about from a dead ball situation, as Kroos sent a corner in short to Carvajal, who played it straight back to the German ace. Having run it into the box, he crossed it over to Varane, who was waiting at the far post to turn it in.

Real Zaragoza tried to react and nearly had a leveller on 23’. Kagawa fired in from the edge of the box but Areola stretched to keep it out. This only served to spur on the Whites, who managed to grab another goal on the half hour mark. Kroos, got the ball again and set up Lucas Vázquez, who took a touch with his left before burying his chance with his right foot.

The second half continued in much the same fashion. Real Madrid looked dominant, while Zaragoza did their best to react. It was no surprise to see the first threatening move come from the visitors, but James’ attempted chip on 57’ sailed over the crossbar. From then on, with the arrival of Luis Suárez and Álex Blanco from the bench, the hosts began to look more dangerous. They were thwarted time and again, though, by a solid defence which barely gave their opponents a sniff of goal.

A fine goal for Vinicius Jr.
The minutes were ticking by, but with 72 minutes gone, the game enjoyed its best goal of the night. Vinicius Jr. linked up with James, danced into the box, and finished with a nonchalant flick of his right foot which caught the hosts’ goalkeeper unawares. There was still time left for Areola to expertly deny Luis Suárez in a one-on-one with 78 on the clock, and for the madridistas to get their fourth of the evening soon after. Brahim slid the ball through to Carvajal and the academy product put it on a plate for Benzema to turn into the back of the net. Real Madrid are through to the Copa del Rey quarter-finals and extend their unbeaten run to 20 games. They’ll find out their next round opponents in Friday’s draw. 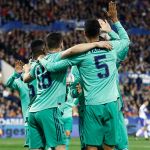