3
It's the first win of this new year for Real Madrid. Zidane's side got the better of Getafe (0-3) to close out the first half of the LaLiga campaign. Varane was the star of the show, notching the first two goals of the game, before Modric put the finishing touches to a fantastic win at the Coliseum Alfonso Pérez, a particularly tough ground for visiting sides. The Whites' attentions now turn to their next objective: the Spanish Super Cup.

Real Madrid looked to impose their game on the opposition from the off. However, they were met by the hosts' intense pressure which made it tough to play out from the back. The swiftest way to create danger was to look for Bale, whose pace took him in behind the opposition defence. The minutes ticked by and chances were few and far between in what was a scrappy opening spell. With 24 minutes gone, the first shot of the game arrived as Arambarri volleyed at goal but Courtois was equal to it.. Seven minutes later, Cabrera went to bend it into the top corner but his shot was deflected over the bar.

The opening goal
Following Getafe's early attempts, the madridistas responded with the first goal of the game. Mendy picked up the ball on his flank and whipped in a right-footed cross for Varane, who got in front of his man to head home (34). At 0-1, the game opened up a bit and the chances began to flow. Fajr produced a good strike which only narrowly missed the target, before Benzema tested Soria following a superb piece of individual play (42’). The half-time mark came around with the madridistas still in the lead thanks to two wonderful Courtois interventions up against Fajr and Cabrera in the closing stages of the first period.

Barely eight minutes into the second half, Varane made it 0-2. A sumptuous Kroos free-kick swept into the box and the centre-back was able to head into the back of the net with ease. Despite the score-line, Getafe refused to lie down and Bordalás brought on Jorge Molina as they looked to increase their presence in the box from set-pieces. A Cabrera strike flew just wide once again, before Bale responded with a sweet chipped effort which Soria was just able to keep out (65’).

Modric caps off the win
On 70’, Zidane shuffled the pack, bringing on Valverde and Vinicius Jr. Real Madrid were successfully able to maintain their lead, restricting Getafe to few chances in the closing stages. The clock ticked on and the first victory of the year moved closer, as Jović took to the pitch on 80’ as the Whites' final change. Vinicius Jr. and Bale could have increased the deficit towards the end, but it was ultimately Modric who finished off a slick madridista counter-attack in injury time. A 0-3 win over Getafe and now all eyes are on the Spanish Super Cup. 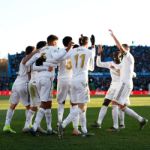