The Whites had chances to beat Athletic but struck the woodwork three times in the last game of the year.
Estadio Santiago Bernabéu

0
Real Madrid ended 2019 with a draw against Athletic, in a match that they deserved to win. The woodwork denied the Whites from claiming all three points, after creating big opportunities to score, but struck the bar twice and the post once. The first chance came from Vinicius Jr. who after winning the ball back in the opposite half, combined with Benzema in the 12th minute and cut back past Iñigo Martínez when it looked like he was going to shoot, but Unai Simón came out on top in the one-on-one. Seven minutes later, the keeper was just as inspired when he deflected a shot on to the bar with his shoulder after a Kroos shot.

More chances
Unai Simon was inspirational and kept Athletic in the match, who in one of the few chances at the other end forced Courtois into action after Williams' close-range shot in the 31st minute.  The Whites continued to enjoy the lion’s share of possession, and they hit back just a minute later.  Kroos played in Benzema, who carried it into the area, rounded Unai Simon and slid the ball goal bound, but Nunez, saved the Basque side with a last gasp clearance.  In the 43rd minute, the referee ruled out a goal by Kodro for offside.

Real Madrid continued to create some promising chances after the break. Kroos took a corner on 59’ and Nacho, who came on in place of Militão, managed to fire a header onto the crossbar. Bale came on in place of Rodrygo and took no time in creating some danger with a rocket of a strike from the edge of the box on 70’. His effort just went wide. Two minutes later Zidane made his final roll of the dice, bringing Jović on for Vinicius Jr.

Jović hits the post
The minutes went by as Real Madrid threw everything but the kitchen sink forward, desperately searching for that much coveted goal. They came agonisingly close on 86’, with Carvajal crossing in for Jović to head in, but his effort came back off the post, something that had cursed the Whites twice before in the game.  Lady luck did not smile on the madridistas tonight. 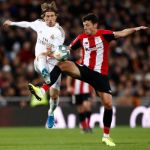