The Whites dominated a game and could have had two clear penalties that were not given.
Camp Nou

0
Everyone has been waiting for el Clásico since the 18th October, when the Competition Committee delayed the match corresponding to match day 10 in LaLiga. Two months later, Real Madrid took to the Camp Nou and deserved to win the game. After a frantic few opening minutes, the first goal scoring attempt came from Benzema, a left-footed rocket that Ter Stegen managed to stifle. Showing focus and putting on intense pressure, Real Madrid forced their rivals to scramble around to clear the danger.

Real Madrid really hit form on the 17th minute with two stellar chances. Casemiro headed a cross from Carvajal that forced Piqué to stop the ball on the line. After that it was Varane who tried the same following a Bale cross. The Frenchman could have had two penalties in a row. The first time, Lenglet made contact with the striker's thigh, and then Rakitic pulled his shirt while a corner was being taken. The Whites kept Barça in their box, and Casemiro (23’) and then Valverde (31’) both tried their luck with shots from far out.

Jordi Alba and Fede Valverde  both had the chance to break the deadlock before the break, but the Culés' effort went wide of the post, whilst the Uruguayan once again drew the best out of Ter Stegen. The second half got under way with Zidane's charges again camped in the opposition's half and this saw Barcelona respond by introducing Arturo Vidal. Fatigue was beginning to take its toll on some players, with gaps beginning to open up and, by the hour mark, the encounter became an end-to-end affair.


Goal chalked off
In the 67th minute, a textbook counter-attacking move involving Valverde and Isco culminated in a Gareth Bale effort that crashed into the side netting. Five minutes later, the Welshman had the ball in the back of the net, but the VAR system ruled the effort out following a Mendy offside. Luka Modric and Rodygo entered the fray in the last 10 minutes but no goals were forthcoming and the two sides remain level on points at the top of the standings. However, if there was one team that deserved to claim the Clásico spoils and take top spot, it was Madrid. 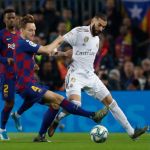