Benzema scored the goal against Valencia in the 95th minute and the Whites will play for top spot in the Clasico on Wednesday.
Estadio de Mestalla

1
Real Madrid levelled up the match to take a point at Mestalla in the last move of the night. When it looked like Valencia were going to take the win, Benzema made it 1-1 in 95', picking up a loose ball after a corner headed goalward by Courtois. Zidane's men will go in to the Clasico level on points with Barcelona and on a run of 11 undefeated games.

Real Madrid had a great start to the match. Superior in the midfield, the Whites moved the ball with patience and won it back quickly thanks to their high press. The first chances came from outside the area with shots from Valverde and Kroos, both kept out by Jaume. Benzema's header narrowly missed the target (14'). Meanwhile, Valencia held back and waited for their chance on the counter. Ferran got on the end of one of them and forced Courtois in to action for the first time (17').

Possession and chances
The minutes ticked by and the tone of the match continued along the same line. Real Madrid controlled play but couldn’t get the goal, as the Whites continued to go in search of the opener. Modric and Rodrygo were involved in two more chances. After coming out unscathed from the strong start by the madridistas, Valencia grew into the game before the break, putting Courtois' area under more pressure and in the 37th minute, Ferran headed over as Celades' side finished strong.

The second half kicked off with a scare for Real Madrid, but Courtois came out on top after Ferrán went through one-on-one. Unlike the first half, the game was more open and evenly-matched after the break, although clear chances were few and far between. As Zidane looked to stretch the game, he brought on Bale and Vinicius Jr. The Brazilian received a Benzema pass and got off a decent shot that was deflected out for a corner by Garay (73’). Just when Madrid were attacking the opposition box with increased regularity, the Valencia goal arrived as Carlos Soler finished off a swift counter led by Wass (78’).

From then on, the Whites went all out in search of the equaliser, leaving spaces at the back. Jović was Zidane’s final change and did indeed get the goal, but it was quickly ruled out for offside. It looked as though Valencia had the points wrapped up, but Real Madrid never give in. In the final move of the game, Courtois came up from the back to head a corner towards goal after a superb leap. Jaume pulled off the save, but the Valencia defence failed to clear and Benzema was on hand to blast into the net. It was all square at Mestalla with just three days to go until El Clásico. 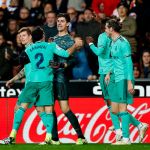