Goals for Rodrygo, Vinicius Jr. and Modric clinch victory for Real Madrid, who will be present in Monday's Champions League draw.
Jan Breydel

3
Real Madrid's presence in Nyon for Monday's last-sixteen draw was already assured ahead of kick-off but as the demands that come with this club's colours dictate, a good performance in the final Group Stage clash was non-negotiable. Zidane's men lived up to their billing at the Jan Breydel Stadium against Brugge, clinching a win in their final Champions League clash of the year thanks to goals for Rodrygo, Vinicius Jr. and Modric.

It quickly became apparent Brugge were playing to continue in European competition, and following an early Militão header from a corner, the hosts tested Areola when Tau struck from 12 yards with 10 minutes on the clock. Jović responded in kind after Casemiro did well to win the ball back, but his shot was turned behind by Mignolet.

Chance for Isco
The Whites looked to keep control of the game with long spells of possession to quell the endeavours of the Belgian side, who were switching between three and four at the back. The first half's finest chance fell to Isco (34’), who picked up the ball and drove to the edge of the area, where he let off a shot that flew just past the post.

The goals duly materialised following the restart. Hans Vanaken almost caught the visitors cold in the very first move of the second period with a chance that came about courtesy of Brugge's high press, but Madrid it was who drew first blood in the 53rd minute. Luka Modric sprayed the ball with the outside of his boot out to Álvaro Odriozola and the wing-back sent in a cross that struck a defender before falling kindly to Rodrygo, whose volleyed effort flew in off the inside of the post. However, the madridistas' joy proved to be short-lived as Vanaken levelled matters just two minutes later.

Vinicius Jr. on the mark
Zidane's charges would have to once again roll their sleeves up and the Whites did just that as they poured forward in search of victory. The visitors restored their lead on 64, when Jović kept a cross alive with a cushioned header and following a moment of uncertainty in the box, Vinicius Jr. was fastest to react and he finished to make it 2-1 to Madrid. Zidane brought on Brahim Díaz, Karim  Benzema and Fede Valverde at a time when Brugge's energy levels were beginning to wane following a high-intensity 80 minutes. Modric rounded off the win in this final group-stage encounter with a tremendous strike from outside the box in added time. Madrid must now wait until Monday to discover their fate in the draw for the last 16. 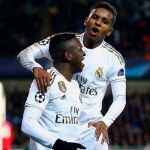