0
Real Madrid saw off Espanyol at the Bernabéu to provisionally move top of the LaLiga standings. The hosts took their time to make the breakthrough, with the opening goal only coming in the 37th minute. Raphaël Varane was the man to get it as he became the 15th madridista to have found the net so far this term. The Frenchman was played in by his compatriot, Karim Benzema, and he produced a slide-rule left-footed finish to beat Diego López, who was the visitors' standout performer on the day.

The madridistas had fashioned a number of openings before breaking the deadlock. Indeed, the first opportunity came in the sixth minute following a sensational piece of play from Vinicius Jr., who was ultimately denied by Diego López when clean through. Eight minutes later, Benzema tried his luck but his curling effort was gathered in by the visitors' custodian. Espanyol produced a response and threatened the Madrid goal on 27', when Esteban Granero's bullet header was kept out by the diving Thibaut Courtois. The final chance before the break fell to Vinicius Jr., who failed to get the better of López following a free-flowing counter-attack that was initiated by Courtois two minutes before the interval.

Real Madrid headed into the dressing rooms at half-time one up, but could easily have extended their lead soon after the restart. This time, López reacted sharply to keep out Benzema in a one-on-one, following a swift break on 53 minutes. The hosts’ dominance showed no sign of waning and chances continued to flow, but the narrow advantage meant the result could yet swing either way. Benzema came close yet again, profiting from a sublime piece of individual skill by Vinicius Jr. on 70’, but his left-footed effort flew just wide of the visitors’ post.

LaLiga’s leading scorer seals the deal
Benzema was not about to let another chance slip by, and indeed, it wasn’t long before the Frenchman popped up to net his increasingly routine Bernabéu goal. Dani Carvajal played a ball in behind for the striker to chase. He cut back, laid it to Fede Valverde, who broke into the box and returned the ball to LaLiga’s top scorer, who made no mistake from close-in with 80 minutes on the clock. Benzema has now netted in his last four home games, taking his tally to 11 in the domestic competition. Three minutes later, the hosts were reduced to 10 men when Ferland Mendy was given his marching orders for a second yellow card. The team stood firm though, retaining their advantage to extend their unbeaten run to nine games (including seven wins). 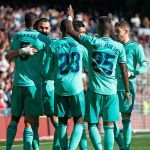