Real Madrid were held by PSG at the Bernabéu in a fine contest that they deserved to win.
Santiago Bernabéu

2
Real Madrid are now in the last 16 of the Champions League. Zinedine Zidane's charges, who ran out at the Bernabéu with their place in the next round already assured after the meeting between Galatasaray and Brugge ended in a 1-1 stalemate, played out a draw against PSG on a night when they had the chances to have taken victory. Karim Benzema extended his purple patch with a brace, before Kylian Mbappé and Pablo Sarabia pegged Madrid back. The Whites, who retain the club's perfect record of having successfully negotiated all of their group-stage campaigns, travel to Brugge in the final matchday and will take their place in the draw as group runners-up.

The opening stages of the game saw the two teams size each other up, with both sides visibly aware of the quality of the opposition. Sergio Ramos and Mauro Icardi traded the first blows with a pair of headed efforts that failed to find the target. However, the first major chance of the evening came when Toni Kroos let fly with an effort from the edge of the area that whistled over the bar in the 15th minute. As the minutes passed, Madrid began to dominate possession and soon took the lead, courtesy of Benzema's strike following a free-flowing team move. Eden Hazard started things off in the centre circle, whilst Fede Valverde and Dani Carvajal were involved before Isco's effort came back off the upright and the French hitman was on hand to turn the rebound home with 17 minutes on the clock.

Kroos efforts
Having taken the lead, Madrid went on to enjoy their best spell of the game. The Whites were bossing proceedings and looking a real threat. Kroos came close to adding to the hosts' advantage on no fewer than three occasions, but his efforts were repelled by Keylor Navas. He firstly very nearly found the net directly from a corner kick, before firing in two powerful strikes that the visitors' goalkeeper was equal to. Despite all of Madrid's dominance, PSG produced a reaction before the break. Thibaut Courtois kept his side ahead on two occasions as he denied Marco Verratti and Mbappé. The Madrid riposte came from Casemiro and Marcelo as the two teams continued to exchange blows. In the 43rd minute, the referee awarded a penalty after Courtois brought Icardi down and handed the madridista shotstopper his marching orders. However, the decision was overturned by the VAR and play was pulled back for an earlier foul on Marcelo.

Thomas Tuchel brought Neymar on for the start of the second half as he looked to mount a comeback. Madrid came out the blocks as the sharper of the two teams after the break though and Benzema would have extended the lead but for Keylor Navas’ fine intervention with 46 on the clock. Three minutes later and Kroos once again tried his luck from the edge of the box. The Whites were running riot now, and Isco and Varane had successive opportunities to net after moves down the left flank. Hazard was then forced off with a knock following a Meunier challenge and Bale came on in his place (68’).

Bale comes within the width of a post
Modric, on in place of Valverde, wasted little time in influencing proceedings as he began the move which would lead to the second goal. Isco headed the ball on and Marcelo crossed beautifully for Benzema to complete his brace with a fine header (79’). The goal spurred the visitors into life and they went on to bring the tie level inside four minutes. Mbappé pounced on a defensive error to reduce the deficit (81’), before Sarabia hit the equaliser (83’) when he latched on to a loose ball in the box. Both teams had chances to win it in the closing stages, the clearest of which was a Bale free-kick that crashed back off the woodwork. It finished 2-2, and the Whites head into the Champions League last 16. 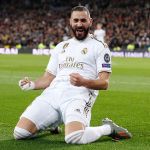