Goals for Benzema, Valverde and Modric complete a turnaround after Real Sociedad had gone ahead early on.
Estadio Santiago Bernabéu

1
Real Madrid were able to cancel out Willian José's early goal and go on to take three crucial points to keep the pressure on Barcelona, with whom they sit level at the top of the table. The Real Sociedad goal came just two minutes into the game when Ramos laid the ball back to Thibaut Courtois, unaware Willian José was waiting to pounce. The forward nipped in, took it around the home goalkeeper and turned it into an open net to put his side in front.

The Whites would have to come from behind, but it was Real Sociedad who came close to getting the second goal of the game on 15 minutes. Oyarzabal crossed, Odegaard scuffed his shot and Willian José was kept out by a sublime Courtois stop at point-blank range. Two minutes later, the home side responded when Ferland Mendy's rasping long-range drive forced Remiro into a fine stop.

Chances
It was a pulsating affair already and with both teams enjoying a wealth of opportunities, the hosts came close once again. Eden Hazard picked the ball up on the half-turn, cut inside Zaldua and unleashed a sublime strike, but a diving Remiro was equal to it once more. Then it was Real Sociedad's turn to try their luck, but Odegaard's sighter from distance ended up in Courtois' gloves.


The minutes were ticking by and before the interval the hosts were back on level terms. In the 37th minute, Modric swung in a free-kick from out wide that was met by Karim Benzema, who guided the ball home with his shoulder. This goal saw LaLiga's leading marksman extend his purple patch and means that he's now been on target in each of his last three outings, with a return of five goals in these games.

Valverde on the mark again
The second half really couldn't have got off to a better start and with 47 minutes on the clock, the home side hit the front. Modric brought the ball under his spell on the edge of the area, before teeing up Fede Valverde, who unleashed an effort that struck Mikel Oyarzábal and flew past the wrong-footed  Álex Remiro into the net. The Whites were now in the ascendancy and they came close to adding to their advantage in the 62nd minute. A delightful back-heel from Valverde found Hazard, who evaded the attentions of two defenders, only for his shot from the edge of the area to be gathered in by Remiro.

Modric seals spoils
Despite the madridista's dominance, the contest was still in the balance, with Madrid leading by just one goal. However, Modric put the result beyond the visitors' reach in the 74th minute. Gareth Bale, who had entered the fray in place of Rodrygo just minutes earlier, picked out Benzema at the far past and he laid a cushioned header back you Modric, who rifled home a left-footed volley. Before the game was out, Courtois was called into action and was up to the task as he denied Isak in a one-on-one in the 83rd minute. In injury time, Bale produced a sublime piece of play that culminated in the ball dancing across the goalline, with nobody on hand to apply the finishing touch. This result sees Real Madrid record a fifth win in their last six outings (W5, D1) and maintain their unbeaten record this term at the Bernabéu. 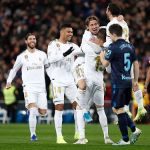