Madrid gave Éibar no chance with a superb display which saw Benzema net a double alongside goals for Ramos and Valverde.
Estadio de Ipurúa

4
Real Madrid enjoyed a fantastic win in Éibar, putting on an exhibition with a brace for Benzema and goals from Sergio Ramos and Valverde. The Whites' intentions were absolutely clear from the first whistle. With just 3 minutes gone, Benzema struck the post, although the play was brought back for an offside. The next move saw Lucas Vázquez drive down the right and Madrid had Éibar pinned back inside their box, a sign of things to come as they struggled to break out.

The game was stopped momentarily after a clash between Mendy and Escalante but on the restart, a swift counter-attacking move between Hazard and Benzema forced Dmitrovic to make a good save. The team were dominating the centre of the park and carrying a threat down both wings, so it was no surprise when the first goal arrived with 17 minutes on the clock. Benzema, Modric and Valverde all linked up beautifully for the Frenchman to strike and make it 0-1.

Spot-kicks and a brace
With barely any time to take it in, three minutes later De Blasis fouled Hazard in the box and Sergio Ramos stepped up to convert from the spot. The madridistas were creating chance after chance down both flanks, with the Belgian taking a starring role. First, he went through one-on-one with Dmitrovic, before a linking up with Benzema with a neat flick and delivering a rabona cross which was just begging to be poked home. On 29 minutes, Lucas Vázquez was then brought down in the area again and Benzema made it 0-3 from 12 yards to complete his brace.

With the game all but sewn up, Éibar went on one final attack to end the first half, but could not test Courtois. The Whites' parade would not be slowed by the constant rain falling at Ipurúa and Hazard was the first to try his luck after half time. Real Madrid’s energy dropped a little in attack, but not defence, where they stood firm and solid in what ended up being some of the best minutes for the hosts. Benzema did come close to firing in a third with a swift counter-attack.

Goal-scoring debut
It was Valverde who stole the show, though, with his first goal for Real Madrid. Once again, the ball switched from left to right, from Mendy to Modric, who passed back to the edge of the box where the Uruguayan was waiting to smash home with his right foot. Zidane brought on the reinforcements in the shape of Isco, Vinicius Jr. and Brahim in place of Hazard, Valverde and Lucas Vázquez. The result would not change again, as a stellar Real Madrid performance sealed a fine win over Éibar. 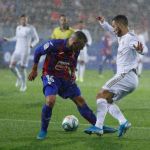