Real Madrid drew with Betis in a game where there was a possible penalty in minute 81 due to a Feddal handball in the box.
Estadio Santiago Bernabéu

0
Real Madrid drew with Betis after a controversial refereeing decision in minute 81, when Benzema crossed in and Feddal handled the ball in the box. Neither referee Sánchez Martínez nor Estrada Fernández, who was in charge of VAR, saw it as a penalty.

The Whites had the clearest chances but could not get on the score sheet. The first chance came in the seventh minute. Carvajal passed to Modric and the Croatian let it slide through to reach Benzema. The Frenchman was one on one with Joel, who blocked the striker's effort. A minute later, Hazard scored after a magnificent piece of personal play, but VAR ruled the Belgian as offside.

More chances
The Whites’ pressure was causing Betis all sorts of problems and the Andalusians were struggling to string two passes together. With just over 20 minutes gone, the first chance did present itself for the visitors though, when Álex Moreno crossed for Fekir, whose shot skimmed the outside of the post. Real Madrid continued to dominate the clash but were just unable to convert their chances into goals. Carvajal whipped a ball into the box on 36’ and Benzema’s acrobatic effort flew just wide. Ramos then had an even better opportunity on 44 minutes as a Modric pass was chested down by Benzema but the Betis goalkeeper reacted smartly to keep out the onrushing captain’s first-time effort.

Mendy up against Joel
Real Madrid enjoyed another fine chance to take the lead after the break. With 64 on the clock, Mendy’s pace took him away from his man and in behind to go one-on-one with Joel but he failed to find the target. One minute later, Zidane brought on Vinicius Jr. in place of Rodrygo. The minutes ticked by, before the most controversial moment of the game came on 81 minutes, when Benzema crossed into the box and Feddal appeared to stop the ball with his hand.

Pressure to the end
The closing stages saw the hosts camped around the opposition box and in time added on they had another two great opportunities to take the three points. Mendy, crossed and Vinicius Jr. brought the ball superbly under his spell, but Joel came out on top in the one-on-one yet again. The last chance of the game fell to Ramos, whose backheel in the six-yard box came back off the visiting goalkeeper’s face. 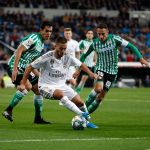