Rodrygo, Kroos, Ramos, Benzema and Jović got the Whites' goals at the Bernabéu.
Estadio Santiago Bernabéu

0
Real Madrid's return to the Santiago Bernabéu 25 days on from their last outing on home soil could hardly have gone much better. The Whites thrashed Leganés in the first of three home games with a convincing performance which displayed the utmost focus and discipline from the first minute. Indeed, their opening spell was quite spectacular, flying into a 2-0 lead inside eight minutes to effectively kill the game as a contest.

Karim Benzema, who has found the back of the net in every LaLiga home game so far, was the provider this time. First, he turned a Marcelo cross to the back post into the perfect lay-off for Rodrygo to steer the ball home with ease on seven minutes. He then bewildered his marker with a series of quick step-overs as he awaited Kroos' run from deep, before presenting the German with another beautifully weighted pass which he was able to finish with aplomb.

Ramos gets on the scoresheet
The Whites were running riot now, enjoying themselves as the crowd revelled in their performance. The third goal would arrive before the half-hour mark. With 22 minutes on the clock, Casemiro conjured up a sublime pass with the outside of his boot to pick out Eden Hazard, who was toppled by Juan Soriano inside the area. Sergio Ramos, who was made to retake his penalty after the visiting goalkeeper strayed from his line, eventually converted from 12 yards.

No further goals were forthcoming before the break, despite the hosts mustering a string of clear-cut chances to have added to their lead. The first such opening fell to Fede Valerde, who fired over from inside the box after a fine solo run from Rodrygo in the 30th minute. The last chance of the half came nine minutes later, when Karim Benzema and Dani Carvajal exchanged passes, before the Frenchman's effort drew the best out of Juan Soriano.

Fit-again Modric returns
The tempo of the contest dropped off after the interval, although the Whites continued to create a spate of chances, including a Benzema effort from the edge of the area that hit the woodwork with 67 minutes on the clock. Barely a minute had elapsed when Marcelo regained possession in the middle of the pitch and found Luka Modric, who five minutes after having entered the fray for Toni Kroos, cut inside brilliantly to shake off the attentions of Omeruo, before the Nigerian brought him down inside the box. Benzema made no mistake from the spot to extend his streak of having netted in each of the side's home outings so far this term.

Jović opens his account
There was still time for another goal, with the fifth of the night coming in added time. Carvajal swung in a cross that Jović nodded home brilliantly to claim his maiden goal in Madrid colours. Tonight's game saw the Whites secure maximum points, courtesy of a fine performance, in which they recorded a clean sheet for a second successive game. 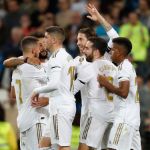