Real Madrid overcame Galatasaray courtesy of a Kroos strike to move up to second in Group A.
Ali Sami Yen

1
Real Madrid's second away trip of this season's Champions League campaign yielded an important win in Istanbul as the Whites saw off Galatasaray to move into second spot in Group A. The madridistas showed good focus right from the off, with Valverde regaining possession in the first move of the match and within seconds, Rodrygo was bursting into the hosts' box and he found Hazard, whose effort was deflected. The madridistas were looking well organised and with the Uruguayan pulling the strings in the middle, Casemiro was next to try his luck, but his fourth-minute effort sailed over the bar.

However, this is the Champions League and after the visitors' initial dominance, Galatasaray began to gain a foothold as Thibaut Courtois was called in action. The Belgain stood up tall to twice deny Florine Andone. Madrid were posing a threat with space to run at, with Rodrygo and Benzema getting on the end of counter-attacking moves that were a foretaste of what proved to be the winning goal. With 18 minutes on the clock, Eden Hazard picked the ball up some distance from goal and exchanged passed with Benzema, before entering the box and laying the ball back to Kroos, who slotted home to break the deadlock.

Ahead on the scoreboard, the Whites were looking strong, winning back possession and playing out at speed. The second goal almost came this way through Hazard (27') and Benzema (39'), although Belhanda also had the chance to equalise, but his effort was kept out by Courtois. After the break, Terim brought on Feghouli for Donk and with the Turks on the attack, Benzema had a one-on-one with Muslera, a golden opportunity to double the lead, but the keeper sent it behind for a corner.

Hazard hits the crossbar
Around the hour mark Madrid were getting in good positions but were unable to make it 2-0. Carvajal, Kroos and Marcelo had chances, although the clearest was for Hazard (64'), who after dribbling around the goalkeeper inside the area, sent his shot on to the crossbar. With so much space, Zidane brought on James, Vinicius Jr. and Jović. More chances came, but the scoreline stayed the same. 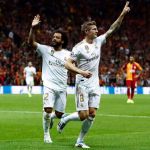