Real Madrid lost for the first time this season in LaLiga against Mallorca.
Estadio Son Moix

0
Real Madrid could not get a win at Son Moix to continue their unbeaten run in LaLiga. A goal from Lago Junior in the opening minutes gave Mallorca the three points at the Whites failed to convert their chances. Benzema came close to scoring but he hit the crossbar. Zidane's team took just one minute to test Reina. Isco fired in a shot from the edge of the box after some great play from Odriozola on the right. It was Mallorca who drew first blood however. Lago Junior curled in a neat right footed shot from the left to sail past Courtois (7’). The goal served to push the home team on, as they nearly made it 2-0, before the referee ruled Budimir's goal as offside (14’).

Slowly, Zidane's side took more initiative. Vinicius Jr. could not round off his individual moment of brilliance, and then Benzema, who picked up a long-range James pass, rattled the crossbar in what would be the Whites best gambit (27’). Mallorca kept creating danger, and Gámez took a shot that ricocheted off Militão. Before the break, Marcelo tried his luck from far out to no avail. Real Madrid headed into the dressing room a goal down.

The Whites looked for the draw after the break, penning Mallorca in well. Benzema tried to test Reina from long-range on 56’. Vinicius Jr. continued to look lively, but could not find the killer blow in the final few yards. The hosts went on the counter to try and kill the tie off, but Budimir saw his header bounce wide.

Real Madrid go down to ten
With half an hour to play, Zidane sent on Valverde and Rodrygo. Things got complicated as Odriozola saw a second yellow in minute 74 and the Whites went down to ten men. Real Madrid tried as best they could to get the leveller, with Ramos heading over the bar on 78’. Brahim was the last player to come on for the Whites. The forward nearly had a penalty after some contact in the box from Salva Sevilla (86'). Militão had one last attempt with a header in the dying minutes, but it was Mallorca who rounded off a fiery game with the three points. 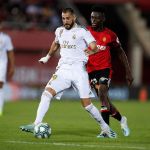