The Frenchman's brace and a Casemiro strike secured the spoils for Real Madrid, who produced a fine first-half display.
Estadio Santiago Bernabéu

2
Real Madrid returned to LaLiga action by picking up all three points against Levante at the Santiago Bernabéu. The Whites, who remain unbeaten so far this term, set themselves up for victory courtesy of an excellent first-half performance, which saw the madridistas breach the Levante backline three times, with the influential Karim Benzema hitting a brace to move on to four goals in the league so far this season.

The hosts' physical power was simply too much for Levante to handle. Real Madrid applied a high press and won the ball back close to the visitors' box to prevent the visitors from gaining any sort of foothold in the game. Indeed, from the 20th minute onwards it was very much one-way traffic as the chances came thick and fast. With 21 minutes on the clock, Benzema unleashed an effort from the edge of the area that drew the very best out of Aitor Fernández. Just seconds later, and after the team regained possession for the umpteenth time, Lucas Vázquez came the width of the post away from handing Madrid the lead. It was now only really a matter of time before the hosts hit the front and the breakthrough duly came in the 25th minute. Dani Carvajal delivered a pinpoint left-footed cross and Benzema rose to guide the ball into the back of net.

Casemiro finishes off fine team move
The home side were now enjoying their best spell of the game and made their dominance tell by doubling their advantage. James slipped the ball to Benzemaand the Frenchman needed just two touches to bring his tally for the current LaLiga campaign to four. The first touch, with his right foot, saw him settle himself, before he fired a left-footed finish past the helpless Fernández. The minutes were ticking by but there was still time for Madrid to add to their lead and take a three-goal advantage into the break. The move that brought the third of the afternoon involved four players and was as ruthlessly slick as they come. Benzema brought the ball under his spell in the middle third, before finding Lucas Vázquez, who spotted the run of Vinicius Jr. in behind his defender and the former executed an inch-perfect pass to find the Brazilian, who squared the ball to the onrushing Casemiro to tap the ball home from point-blank range.

Levante came out and quickly cut the deficit following the break. Clerc crossed on 49 minutes and Borja Mayoral’s first-time left-footed strike flew into the back of the net. Real Madrid’s response came eight minutes later when an evasive Benzema crafted an inch of space on the edge of the box to get his shot off, but was unfortunate to see his effort come back off the post, the second time the Whites had struck the woodwork.

Further chances
Zidane shuffled his pack, giving competitive debuts to both Hazard and Militão. The Belgian ace immediately enjoyed a fine chance to mark his maiden appearance with a goal, but Fernández was at full stretch to deny him on 66’. The Whites continued to create opportunities to increase their lead, and could have done so once again five minutes later. James picked out a wonderful long ball, which Vinicius Jr. superbly took in his stride inside the area, but the visiting goalkeeper came out on top in the one-on-one.

Then, when everyone least expected it, Levante profited from another breakaway, finished when Melero headed powerfully into the back of the net. The closing stages became rather more tense than the Whites would have liked, but they were able to maintain their lead to hold on to the three points ahead of Wednesday’s Champions League opener against PSG. 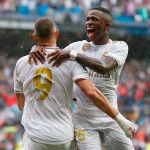