The Welshman twice drew Real Madrid level in a match where there were chances to win.
Estadio de la Cerámica

2
The visit to Villarreal is always highlighted as a difficult fixture for Real Madrid, who deserved to take home the spoils, but they were only rewarded for their hard work with one point in Matchday three of the LaLiga season. The team started well, with Mendy making his debut, pressing the opposition high in their half during the first 10 minutes. The Whites looked dangerous from the off and with five minutes on the clock, they came very close to opening the scoring after a dangerous cross was whipped in from the left by Bale and Albiol had to send the ball behind. The resulting corner was delivered on to the head of Jović, who couldn’t find the net.

Gerard responded with a deflected shot and in the next action there was a slice of bad luck for Real Madrid. An error ended with the ball breaking free inside the area, and Gerard took advantage to put Villarreal ahead (12’). Madrid went in search of an equaliser and Bale, from a free-kick, was the first to come close, followed by shots from outside the area by Jović (24’) and Kroos (30’). The Whites were winning all of their aerial duels and creating more chances.

Benzema strikes the post
A Ramos header almost found the top corner, and Casemiro had the clearest chance, but his bullet effort flew just wide of the goal with the keeper beaten. Lucas Vázquez then had a shot from a tight angle which went into the side netting (35’) and Benzema struck the post with a great strike just a minute before the break. All the chances finally culminated in a goal on the stroke of half-time. A great one-two between Carvajal and Jović sent the full-back free inside the area, and the Spanish international squared the ball for Bale to side foot home and make it 1-1.

And to dismiss any doubts over Madrid's chances of victory, the visitors came out looking an even greater force after the break. The Whites were dominating possession in the middle third and their pace down the flanks brought the first chances of the second period. Casemiro tried his luck from range, whilst Kroos brought the best out of Andrés Fernández with two efforts. Madrid were forcing corner after corner and Benzema had the ball in the net in the 60th minute, only for his goal to be chalked off following a marginal offside.

Relentless effort
Villarreal were now on the ropes, but as is so often the way of things in football, the hosts regained their lead with 15 minutes remaining. Moi Gómez made it 2-1 with a cross-shot from the left. Following the introductions of Vinicius Jr. and Valverde, Madrid looked intent on probing right until the end in this action-packed encounter. In the 86th minute, Modric won the ball back and picked out Bale, who cut in on the left-hand side of the box and unleashed a left-footed effort that crept inside the near post to restore parity. The 88th minute produced the most controversial incident of the night, when Vinicius Jr. hit the floor inside the area following a challenge from Albiol. The referee failed to award a penalty and the contest ended with Bale seeing red on a night when Madrid deserved more from the game. 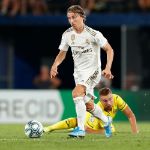