The Whites drew on their visit to Atlético to remain the only unbeaten side in LaLiga.
Estadio Wanda Metropolitano

0
The derby at the Wanda Metropolitano ended in a draw which sees Real Madrid stay top of the table. It was a tight game with few chances, in which Benzema enjoyed the best opportunity of the game but Oblak was equal to it. Zidane's side ultimately pick up another point which ensures they continue leading the way as the only unbeaten team in LaLiga.

Madrid looked to take the initiative early on. They were patient in possession, while Atlético set up to nip in and take advantage of their pace on the counter attack. That's how the first rojiblanca chance came about as João Félix set off on a decent run but his shot was pulled wide. Up the other end, it was Bale who was posing the most threat down the right and the Welshman tried his luck with a long-range effort which was deflected wide.

Kroos attempts
As the minutes ticked by the game began to open up, though chances were still few and far between. Both teams were waiting for their rivals to make a mistake and turned to set-pieces to cause problems. The challenge of finding gaps in the hosts' defence saw Kroos test Oblak from range twice in quick succession. João Félix then had an effort of his own from the edge of the box but failed to find the target, before Courtois parried a dangerous Trippier cross in what was the last real action of the first half.

The second half started with a header from Correa that looped over the bar, the Argentine having replaced Vitolo at the break. Real Madrid continued to test Oblak's goal, but there was a lack of cutting edge up top. With 57 minutes gone, Bale had a shot from inside the area, but it was deflected wide. Then, with more than twenty minutes left to play, Zidane brought on Modric. The Croatian's first effort also flew wide of the post.

Benzema's chance
With 73 on the clock, Saúl had a header from a corner that skimmed the crossbar in one of the clearest chances for the home side. Two minutes after that, Benzema responded in kind meeting a Nacho cross with a great header but Oblak got down well to keep it out. James and Jović joined the Whites' attack from the bench as they went in search of the winning goal, but the match went on to finish all square at the Metropolitano. 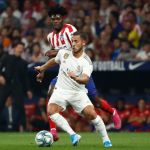