The Whites slipped to a 1-0 defeat against Tottenham and will close out their involvement at the tournament against Fenerbahçe.
Allianz Arena

1
Real Madrid faced the first of their pre-season outings on European soil with a stern test against Tottenham, as Zinedine Zidane's charges succumbed to a 1-0 reverse against last season's Champions League runners-up. A Harry Kane effort tipped the game in the Londoners' favour in a contest that saw the Whites fail to take their chances and in which Keylor Navas produced an eye-catching display. The madridistas will now meet Bayern or Fenerbahçe in Wednesday's third-place play-off (6pm CET).

Tottenham began the game on the front foot as they applied a high press, whilst Rodrygo, who looked to get past his man every time he got the ball, was a standout performer in the madridista ranks. However, the sort of inaccuracy to be expected during pre-season prevented the two teams from mustering any clear-cut openings. Mauricio Pochettino's men were the first to pose any sort of threat on goal, but their efforts were repelled by an inspired Navas as the Costa Rican goalkeeper kept out three shots in the space of barely a minute. Spurs hit the front in the 22nd minute, when Kane capitalised on a defensive slip-up to put his side a goal to the good.

Madridista chances
The madridistas weren't slow in producing a reaction. Karim Benzema came close to restoring parity with two efforts after being fed by Dani Carvajal and Luka Modric from the right. Real Madrid were gradually pushing up the field and Toni Kroos and Eden Hazard tried their luck from range. However, Kane continued to be a thorn in the Madrid backline, with Navas clawing yet another of the forward's shots out with 31 minutes on the clock. The final chance before the interval fell the way of Benzema, who failed in his efforts to find the top corner.

The second period began with the madridistas well on top. Within the opening 10 minutes, Benzema, Marcelo and Hazard all had chances to have levelled matters. However, the Whites failed to put their chances away and Keylor was, once again, the saviour. The custodian palmed out two fierce shots from Son Heung-min  and Dele Alli. There was now less than half an hour remaining and Zidane set about shuffling his pack in search of an equaliser. On 75',  Rodrygo fired home a Marcelo centre only to see his effort ruled out for offside. In the very next move, Sergio Ramos really had to stretch to get his head to Benzema's cross. In the 85th minute, Kubo unleashed an effort from outside of the box that Hugo Lloris was equal to. Shortly afterwards, Spurs' Troy Parrott was denied by the upright. This is how the game ended as Real Madrid fell to a 1-0 defeat in this, their fourth pre-season outing. 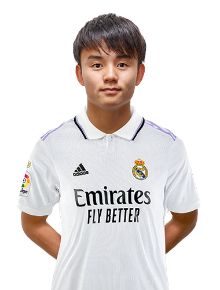 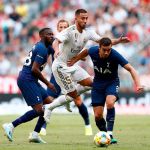