“We have a chance to keep making history and we want to be the only club to win three Club World Cups in a row” said the club president.
Florentino Pérez presided over the fan group meeting at the Park Hyatt in Abu Dhabi mere hours before the Club World Cup final this evening against Al Ain (5:30pm CET, 8:30pm local time). The event heavily represented the club and it's values, and it began with an emotional tribute from the club president.

Ángel Luis Heras from the Real Madrid Board of Directors, passed away last night. All who were present held a minute's silence.

Florentino Perez later thanked the fans for their support: "Thank you for this warm reception you have given us in Abu Dhabi. This is where we won the Club World Cup just a year ago and the support you showed proved key. We're back with an even bigger challenge: to be the only club to win three Club World Cups in a row."

"Well done Al Ain for reaching the final. Football fans in this great country must feel a sense of pride. Our team has a new chance to keep on making history. This squad is already part of Real Madrid history, but they want to continue playing for the fans and they know that they will have support and love from each and every one of you."

"Our club is admired and loved more than any other because no one has a record like Real Madrid. We are loved for our values: hard work, sacrifice, modestly, respect, fair play, solidarity, overcoming challenges and the ambition to improve every day. These are the foundations of what unites us. Origins, language, religion, culture, these aspects do not matter. We are all united by the same passion for Real Madrid."

After the president gave his speech, the Whites' fan groups all received a commemorative gift. The fans watched several videos of the team's best moments at the event. Fans were later given the chance to have a photo with Raúl, Butragueño, Arbeloa and Roberto Carlos. 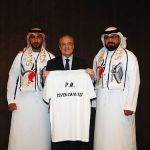