River Plate-Boca Juniors will be played on Sunday 9 December at 8:30pm CET.
The Santiago Bernabéu is set to host the final of the Copa Libertadores between River Plate and Boca Juniors. The clash will take place on Sunday 9 December at 8:30pm and Conmebol have issued a statement confirming that the Bernabéu will be the venue for the title-decider.

Since its inauguration in 1947, the Santiago Bernabéu has played host to countless international showpieces. Among them are four European Cup finals: Real Madrid 2-0 Fiorentina (1957), Milan 4-1 Ajax (1969), Nottingham Forest 1-0 Hamburg (1980) and Bayern Munich 0-2 Inter (2010). It was also the setting for the European Championship final between Spain and the Soviet Union (2-1) and the 1982 World Cup decider between Italy and the German Federal Republic (3-1).​ 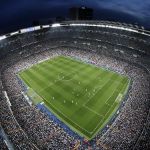