President Florentino Pérez delivered the trophy, which can now be seen in the 'Kings of Europe' room.
La Decimotercera is now on display as part of the Tour Bernabéu. President Florentino Pérez has delivered the trophy won in the final in Kiev and placed it alongside the other 12 European Cups in the trophy cabinet in the Kings of Europe room. After Real Madrid became the first team in history to win three consecutive Champions League trophies, fans can now enjoy the latest addition and pose for photos alongside all 13 European Cups.

The room which houses the titles on the Tour is a unique and particularly impressive space, complete with a light show, sound effects and flurries of confetti which delight every madridista. Standing before the 13 European Cups,, is an 18-meter screen and audio-visual system which is part of an ingenious game through which you can reveal commemorative items and look back over the Kings of Europe's thirteen titles. 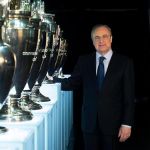