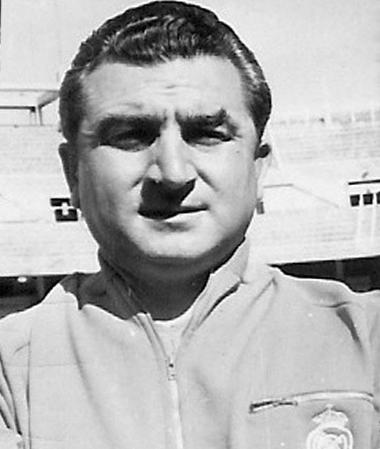 A traditional man of Madrid and Real Madrid. A midfielder with a great personality,Miguel Muñoz played for the Whites for ten years. He was captain and a real benchmark for side during the 50's. As player and manager, he gave everything for the club, enabling him to win five European Cup titles over these two eras.

His career began with football in Madrid, before he moved to Logroñés, Racing Santander and Celta Vigo. Miguel Muñoz and Pahíño had a great season with the Galician side, and it culminated with the two players joining the Whites in 1948. The team went through a transitional phase, acquiring players that led it to become leaders of Spanish football. His first La Liga title came in 1953-54 season.

On 13 June 1956, at the Parc des Princes, he became the first Real Madrid captain to lift the European Cup. Muñoz, Di Stéfano, Rial, Marquitos and fellow teammates managed to defeat Stade Reims in Paris, beginning one of the most illustrious eras for Madrid fans.

He played for the Whites until 1958. Over the course of the ten years he won three European Cups, four La La titles and two Latin Cups. After hanging up his boots, he maintained his ties with Real Madrid, first as manager of Plus Ultra and then of the first side.

Following more success as the Real Madrid coach
Miguel Muñoz became an example from the dugout. The man from Madrid became the longest serving manager. He was manager of Real Madrid for fourteen consecutive years, and left a definitive footprint of success.

Fourteen titles were added to the trophy room at the Santiago Bernabéu, until in 1974, he passed the baton onto Luis Molowny. Among those titles, two new European Cups and the first Intercontinental Cup stand out. He also had an outstanding role as manager of the Spanish national side. 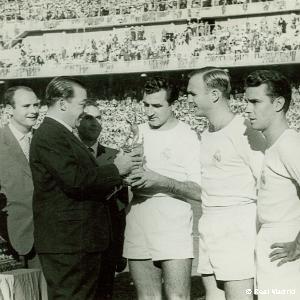