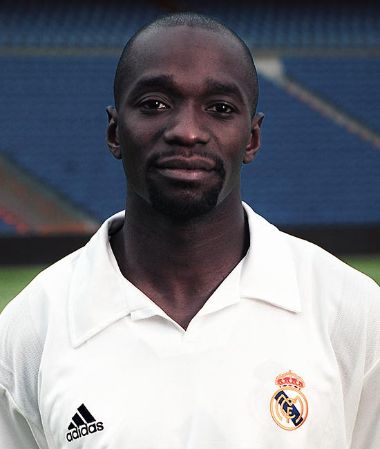 Position: Midfielder
Appearances: 145
Goals: 2
France international caps: 71
Claude Makelele covered countless kilometres in his three seasons wearing the Real Madrid shirt. The Frenchman was the engine room in the centre of the park and became a key piece of the madridista set-up, providing balance and bringing a sense of order to the team in his 145 appearances for the club, as well as scoring two goals.

The defensive midfielder arrived in the year 2000 from Celta and quickly carved out a place in the team. He was in the starting line-up for the final which yielded La Novena, as Real Madrid beat Bayer Leverkusen in Glasgow. He had a great positional awareness which allowed him to win the ball back and cover for his teammates superbly.

Aside from the European Cup he won in 2002, Makelele clinched six other titles with the Whites: 1 Intercontinental Cup, 1 European Super Cup, 2 LaLigas and 2 Spanish Super Cups. Despite being born in Kinshasa (Democratic Republic of Congo), he picked up 71 international caps for France, playing in the World Cup final in 2006. Following his time at Real Madrid he went on to play for Chelsea and PSG, where he retired in 2011.