Goals from Casemiro and an Oblak own goal after a fine strike by Carvajal helped Zidane's side clinch victory.
Alfredo di Stéfano

0
Real Madrid took all three points in the first derby of the season, defeating Atlético with a stellar display at the Di Stéfano stadium. The team claimed its third consecutive win in the space of a week and has also managed not to concede a single goal in this period. Zidane's side dominated play from the start and six minutes in created the game's first clear chance, when Modric's shot from the edge of the area was just inches off target.

It was a sign of what was to come for Atlético during the first 15 minutes. Dani Carvajal won the ball back on 10’, he found Karim Benzema and the Frenchman's fierce shot was brilliantly pushed onto the post by Jan Oblak. Five minutes later, Madrid broke the deadlock. A corner by Toni Kroos was powerfully met by Casemiro whose well-guided header flew into the bottom corner, after the Brazilian had managed to lose his marker. The game then remained tight up until half-time, with neither team creating anything meaningful, as Real Madrid bossed possession (61%) and looked to open up the visitors' defence.

The first chance after the restart went the way of the hosts. Benzema won the ball back and fed Toni Kroos, who was upended on the edge of the area by Ángel Correa, with Ramos firing the subsequent free-kick into the wall. The visitors’ riposte came just a minute later, when Marcos Llorente crossed the ball over but Thomas Lemar failed to get the better of Thibaut Courtois from inside the six-yard box. The minutes were ticking by and the madridistas duly put the game to bed in the 63rd minute, when an Atlético defender cleared a Kroos centre out as far as Dani Carvajal, who unleashed a thumping right-footed effort from outside the box. The ball crashed off the upright and struck Jan Oblak on the back on its way into the net.

Unbeaten
Real Madrid continued to defend their lead as they dominated possession and it took Atlético until the 81st minute to muster their first and only effort on goal. An inch-perfect Renan Lodi cross was met by Saúl, whose header from within the six-yard box produced a worthy save from Courtois. In the 90th minute, the madridistas could have made it three following a counter-attack that culminated in Oblak producing a fine save to deny Lucas Vázquez. There were no further goals as Zinedine Zidane’s men took the spoils in this, the first derby of the season. 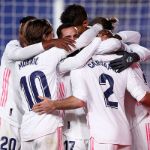