Goals from Cristiano Ronaldo, who has now scored in seven consecutive matches, and Benzema seal the win against a determined Ludogorets.
Natsionalen Stadion Vasil Levski

2
Real Madrid kept their foot on the pedal as they picked up their fifth consecutive win in Sofia. It was no easy task. The Whites had to deal with a lively crowd, a team that was highly motivated by the visit of the European champions and ten hectic opening minutes in the Vasil Levski national stadium.

Madrid were on the back foot after 6 minutes, when Marcelinho made the most of a corner to put his side ahead and become the top goal-scorer in the history of Ludogorets. Four minutes after, the visitors could have equalised. Chicharito was brought down in the area but Stoyanov guessed right to stop Cristiano Ronaldo’s spot-kick.

Equaliser
The home team, aware of its lead, sat back and Real Madrid began to create chance after chance until they finally equalised. Isco started the move 30 metres from the area, beat a man and found Cristiano Ronaldo when the clock read 25.

The run from the Portuguese striker was a memorable one, leaving a defender in his wake with a spectacular back heel, and as he pulled the trigger he was taken out in the box. This time he delivered and made up for his previous miss. The scores were level again.

The score remained unchanged until the break, despite the fact that Chicharito came close to finding the net twice. Marcelo crossed and the Mexican rose above the rest to head goalward after 32 minutes, but Stoyanov was up to the task and held on to the ball. The next chance was a better one. The move started with Ramos, then Marcelo and Isco broke into the area to find Chicharito, whose shot was just centimetres wide of its mark.

Chances after the break
The second half in Sofia got off to a lively start. After two minutes, Cristiano Ronaldo came close to breaking the deadlock. His left-foot shot across the goal just missed its target. Bale, in the 52nd minute, and Chicharito, in the 56th, had clearer chances. In the first, Isco took a free kick and the Welshman stole a yard from the defence, but his header was met with an inspired Stoyanov, who cleared the ball off the goal line.

Benzema takes to the pitch
The next came as the result of a superb counter-attack, something that is becoming typical of this team, but the Mexican’s strike from close range failed to find its target. The Whites were not having much luck, as they proved after 68 minutes, when Benzema, who had come on for Chicharito, provided a majestic pass to Ronaldo, who brought the ball under his spell and beat Stoyanov. But Moti appeared from nowhere to save the ball on the line.

However, he was unable to repeat the feat in the 77th minute. Marcelo crossed in from the left and Benzema put Madrid ahead with a delightful volley. The visitors had come back through the Frenchman’s goal to turn a difficult looking match to their advantage. It was victory in the first away match for the champions of Europe and leaders of Group B. 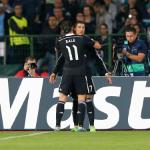