This was a brilliant decade. A pleiad of players, led by Alfredo Di Stéfano, put Real Madrid at the summit of football. The team that won five European Cups in a row amazed the world with its spectacular brand of football. An endless torrent of success made the club the most decorated in Europe. It was proclaimed the 'king of kings' and it won the first edition of the Intercontinental Cup (1960) to put the icing on the cake. 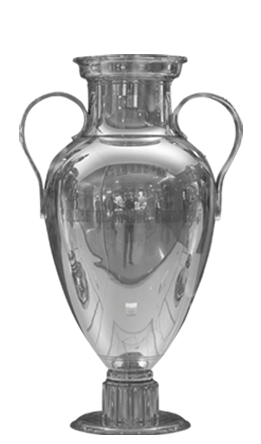 Football in Europe was being played at a high standard. Aware of this fact, at the start of the 50s, renowned French journalist Gabriel Hanot dreamed up a competition that would bring together the champions of each European league. His colleague Jacques Ferrán joined the project. Between them they drew up some regulations that reached the headquarters of the Union of European Football Associations (UEFA). The proposal was much to the liking of the heads of French publication ‘L’Equipe’, which organised the tournament.

They named a commission that included Santiago Bernabéu as one of its vice presidents. The championship became a reality in 1956. Real Madrid won the first European Cup in history on the 13th of June that year. It was the first of the five consecutive cups it would win. This great feat was achieved at the hands of one of history's greatest footballers, Alfredo Di Stéfano,  and during Bernabéu's presidency.

Madrid discovered Di Stéfano in the club's fiftieth anniversary year (1952), when the team took on Millonarios (4-2). Since then the club had its sights set on him and the following year he made his debut as a Madrid player. He became the best footballer in the Whites' history, receiving two Ballon d'Ors (1957 and 1959) as one of the stars of the team that ruled Europe for five years in a row. Everyone was enchanted by his wizardry and he raised the bar for the rest.

In the 1959-1960 season, ex-Madrid player Miguel Muñoz (enlazar ficha) took the reins of Real Madrid. He won the Fifth European Cup in his first season as manager, becoming the first footballer to win the European Cup as a player (three times) and as a manager. In 1960, the merengues were also crowned champions of the world as they won the first edition of the Intercontinental Cup (Real Madrid 5-1 Peñarol de Montevideo).

From the Nuevo Chamartín to the Santiago Bernabéu stadium

With Santiago Bernabéu as the club's president, the institution grew, broke boundaries and became a synonym for success. Twelve years after taking charge he received a great honour from the Members General Assembly. On the 4th of January 1955 it was approved that, as of that date the Chamartín ground would be called the Santiago Bernabéu stadium, “as a sign of recognition of the current president's work”. The president thanked all those present for the distinction and put the idea to the Board of Directors, who approved it.

In the Metropolitano, home to Atlético de Madrid, the Whites successfully defended their league title with a day to remember. Not only did they win, but they did so in record-breaking style. It was the first time a team had won 46 points. The club received a letter of congratulations from the National Ministry of Physical Education and Sports. It was the prelude to an unprecedented run of results in the mid-fifties.

Real Madrid wanted to continue filling its stadium's trophy cabinets and on the 1st of August it strengthened its team with the inclusion of one of the best left wingers in the world, Ferenc Puskas. He was nicknamed ‘Cañoncito pum’ because of his exceptional shooting and eye for goal. He became a Madrid legend, forming a formidable strikeforce with his teammates Di Stéfano, Rial, Kopa and Gento.