Florentino Pérez: "Real Madrid is the most decorated club in history and competition is in our DNA".

“This squad is still hungry for success and understands that the high level of demand does not allow for relaxation or complacency," said the president at the opening of the 2022 Ordinary General Assembly.

Florentino Pérez opened the 2022 General Assembly of Representative Members, which was held both in person and online at the Real Madrid City Basketball Pavilion. The Real Madrid president began by paying tribute to Paco Gento and the madridistas who passed away last season: "Earlier this year we bid farewell to our beloved honorary president. We are all deeply saddened at the loss of one of the greatest legends of Real Madrid and world football. He was part of that generation of legendary players who changed the history of both Real Madrid and football".

"Today, I would also like to express my heartfelt condolences to the victims of the tragedy that occurred in the last few hours in a football stadium in Indonesia, where over 100 people have lost their lives. We send our condolences to all their loved ones. I would like to ask you to hold a minute's silence".

The president went on to say: "We have the responsibility to safeguard the values of this sporting institution, which is the most prestigious and the most loved and admired in the world. These values have been passed down from generation to generation and constitute the pillars of our legacy and history: effort, sacrifice, camaraderie, humility, respect, solidarity and the ability to constantly improve".

Unity
"The unity of all of us, as members of Real Madrid, is what has enabled us to celebrate 120 years of history with the confidence that we can still be leaders in sporting, economic and social terms. The strength of our crest stems from this unity, which has also allowed us to achieve institutional stability".

On the return of the fans
"Last season was historic. And it was so, apart from the victories and the sporting exploits achieved, because we were able to return to our home in both football and basketball. We were finally able to play at the Santiago Bernabéu and the WiZink Center. We were able to be alongside our players and share our passion for Real Madrid with our friends and families".

Sporting project
"Everything that has been experienced this year at the Bernabéu can never be forgotten. Our stadium is magical. This is because our fans stick together until the very last minute and because they know that our players never give up. The winning of the Decimocuarta came against Liverpool, one of the most legendary clubs and one of the most powerful teams in Europe".

"Real Madrid won its 14th trophy as European champions under the guidance of a coach, Carlo Ancelotti, who has once again made history with Real Madrid. This was his fourth European Cup. This team made history last season when, on top of the Champions League, they won the 35th LaLiga title and did it magnificently. And they also won the club's twelfth Spanish Super Cup".

"We have an extraordinary team. This is the result of a sporting strategy and planning process that we have been pursuing for a number of years. This consists of bringing together players who are already the best in the world in their position and incorporating young players who provide a new impetus. This year we have brought in two great players in Tchouameni and Rüdiger”.

"I would like to express our recognition and gratitude to some great figures who have starred in one of the most successful periods in our history. Our captain Marcelo, the player with the most trophies in Real Madrid's 120-year history. Casemiro, one of our great leaders in this wonderful era that Real Madrid has experienced. Bale, a pivotal player in many of the great finals that brought us so much joy. Isco is another of the outstanding players who has left our club after winning five European Cups".

"This squad is still hungry for success and understands that the high level of demand does not allow for relaxation or complacency. After winning the UEFA Super Cup, Real Madrid have begun this new season by winning every game. It is the only team in the five big leagues to have won every game. This certainly constitutes the way forward, to continue working to prolong a period of huge triumphs that has resulted in 23 trophies in the last 12 seasons".

Youth academy
"Our youth academy is the best in the world and it is the place Real Madrid values are instilled every day so that our children and youngsters are well prepared for football and for life. We would like RSC Internacional, a team that competes in the Tercera Federación league, to join this youth academy structure this season, and which will serve as the second reserve team as of 1 July 2023".

Women’s football
"Real Madrid has celebrated its second year of existence and we are very proud that, despite the short period of time, our team has established itself as one of the leading players at both national and international level".

Basketball
"The Real Madrid basketball team is treating us to one of the most successful winning periods in our history. We have won 23 trophies in the last 11 seasons. I would like to make a very special mention for the coach who has guided this team over the last 11 seasons, Pablo Laso".

"In charge of our basketball team into this new stage is the man who was his assistant since 2014, Chus Mateo. His familiarity with the squad and his experience as an in-house coach will guarantee the continuity of the project and he has already won his first trophy, the Spanish Super Cup".

Financial situation
"The previous two seasons, 2019/20 and 2020/21, were characterised by the effects of the pandemic. Through strict measures and a drastic reduction of operating expenses, we managed to close the two financial years with a positive result. The club's management has remained focused on cost control and business development in all areas, with the strategic alliance with the Legends company and its owner Sixth Street being of particular importance".

"Income in the 2021/22 season totalled €722 million, which represents an increase of 10% on the previous season. But this is still €100 million lower than the budget for the pre-pandemic 2019/20 season. The club has posted a profit of €13 million and managed to sustain a profit in all three pandemic-affected financial years, despite forgoing revenue of more than €400 million."

Santiago Bernabéu
"The transformation of the Santiago Bernabéu stadium is one of the greatest challenges our club has faced in recent decades. Three years have now passed since work began and today we can say that the Madridista dream is very close to becoming a reality".

"The aim is to complete the work next summer. And then we will see that this will mark a before and an after for our club. The Bernabéu, one of the greatest temples of world football, will also become a symbol of the avant-garde architecture of the city of Madrid and one of the most spectacular places for leisure and entertainment in Europe".

Members and supporters’ clubs
"I would like to reaffirm my gratitude because you, the members, have shown true loyalty, responsibility and support for the club in the most difficult times. Thanks to your commitment we have been able to weather the effects of such a complex moment. When we talk about the commitment of the madridistas, we have to talk about our supporters clubs".

Foundation
"The Real Madrid Foundation has recently celebrated its 25th anniversary. And it came at the hardest and most difficult time since it was established. The pandemic that we have experienced and an invasion like the one Ukraine is enduring force us to repurpose all our resources and all our means to stand by the side of those who suffer most from its consequences. Through the Foundation, Real Madrid donated more than one million euros to palliate the effects of this war".

Super League
"It is our understanding that the European competitions played during the week need to be changed in order to provide fans with matches throughout the year, at the highest level, between the strongest teams and with the best players in the world facing each other."

"The diagnosis of football's disease is evident: we need a professional, modern and transparent governance, adapted to the global challenges in today's world, and not based on old structures created in the last century. And we need to deliver the quality and attractive product that will restore the fans' enthusiasm and passion for football.

"Real Madrid is the most decorated club in history and competition is in our DNA. Real Madrid founded FIFA, founded the European Cup, promoted all the necessary reforms for the benefit of our sport over the last century, and carries the responsibility, in the eyes of hundreds of millions of fans around the world, to protect football in its entirety. The Super League remains in the midst of European court proceedings challenging UEFA's monopoly in European football”.

Success
"Real Madrid has once again achieved something magical. The world of football and sport as a whole has admiringly witnessed one of the greatest and most exciting exploits in our 120-year history. Real Madrid represents a new understanding of life. These are our values, our ability to sacrifice and devotion, and the unity of all of us, which is the response to everything that has happened".

"This club boasts 24 European Cups, 14 in football and 10 in basketball. This is our pride and it is also our responsibility: to belong to the best club in the world and the best club ever”. 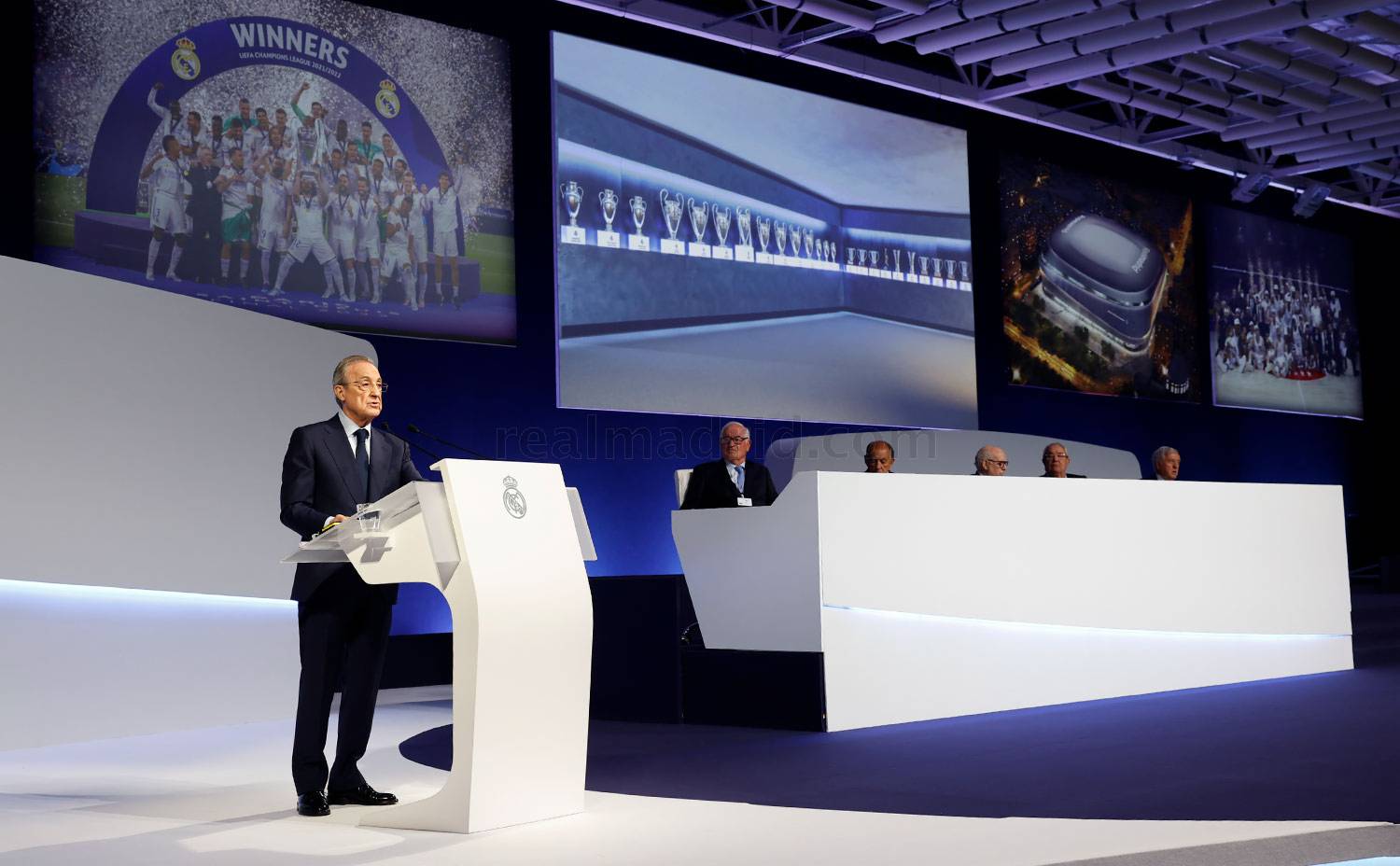 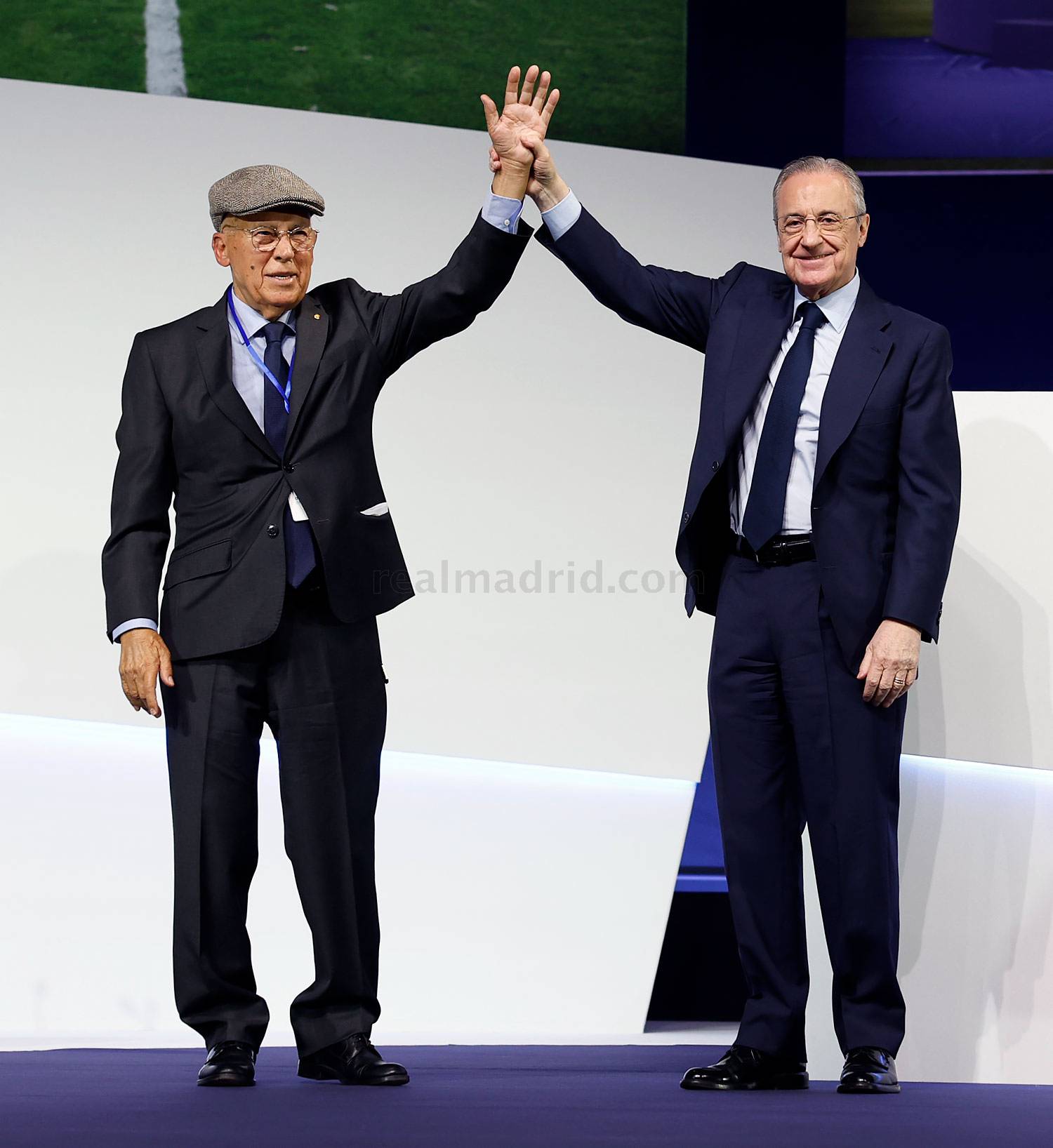 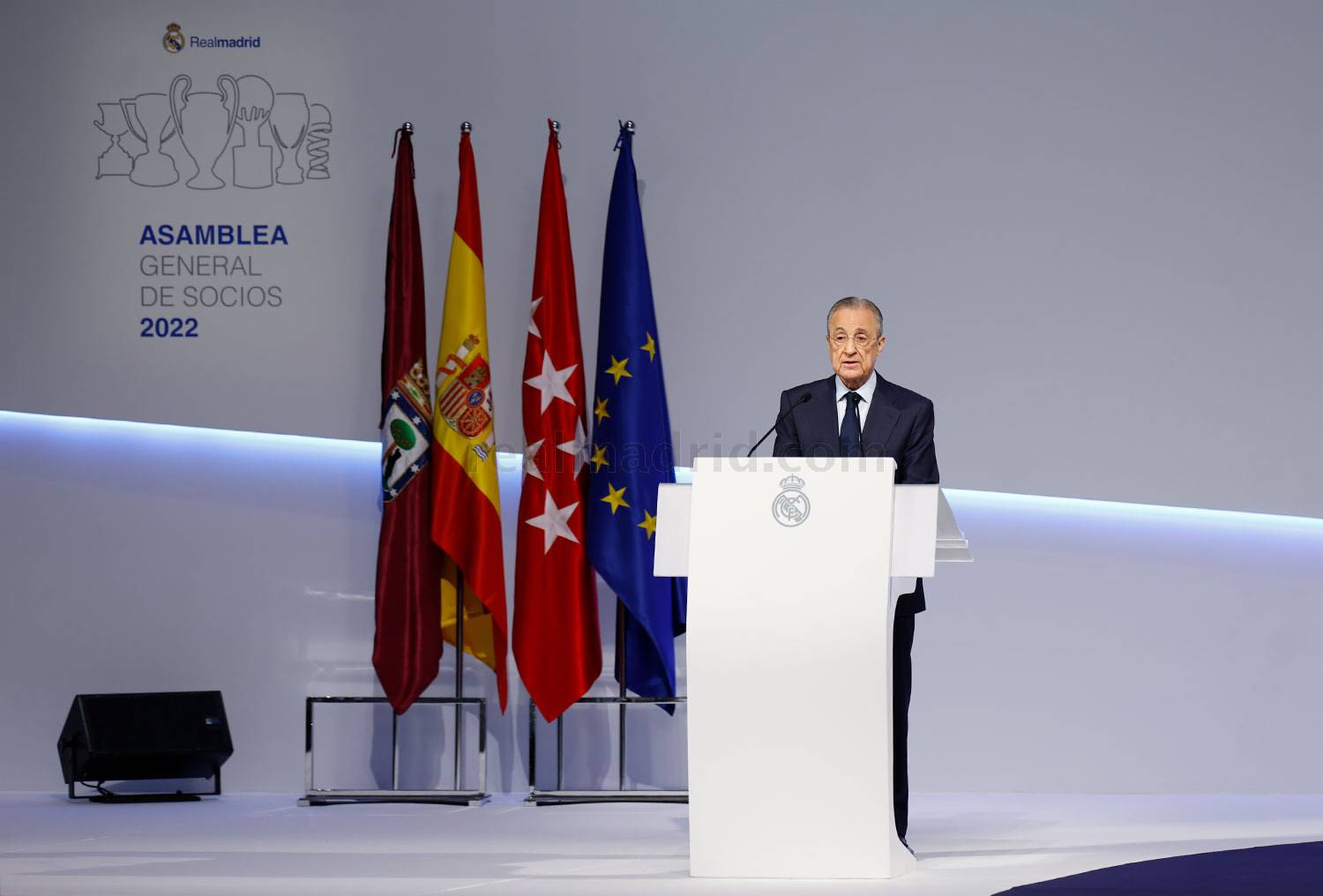 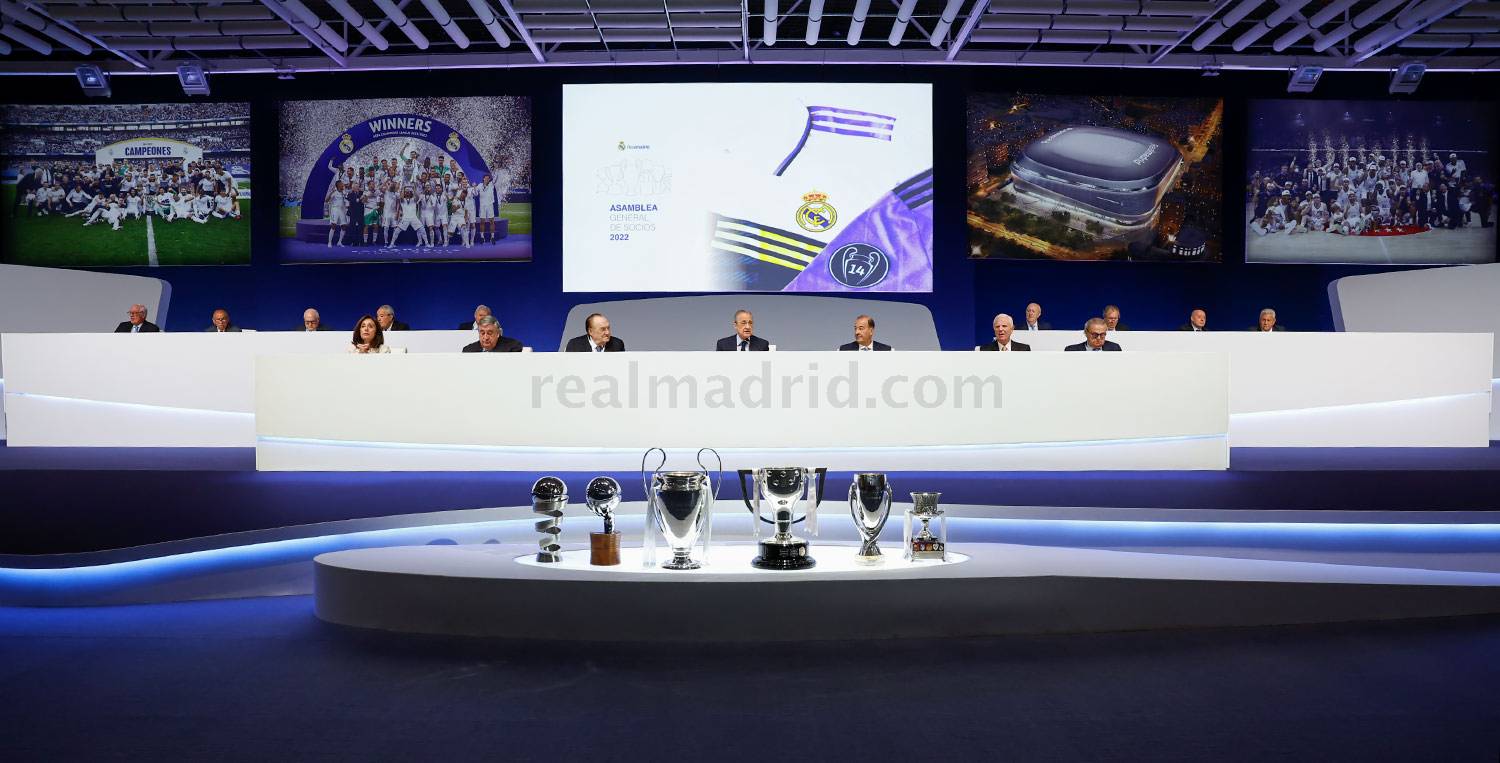 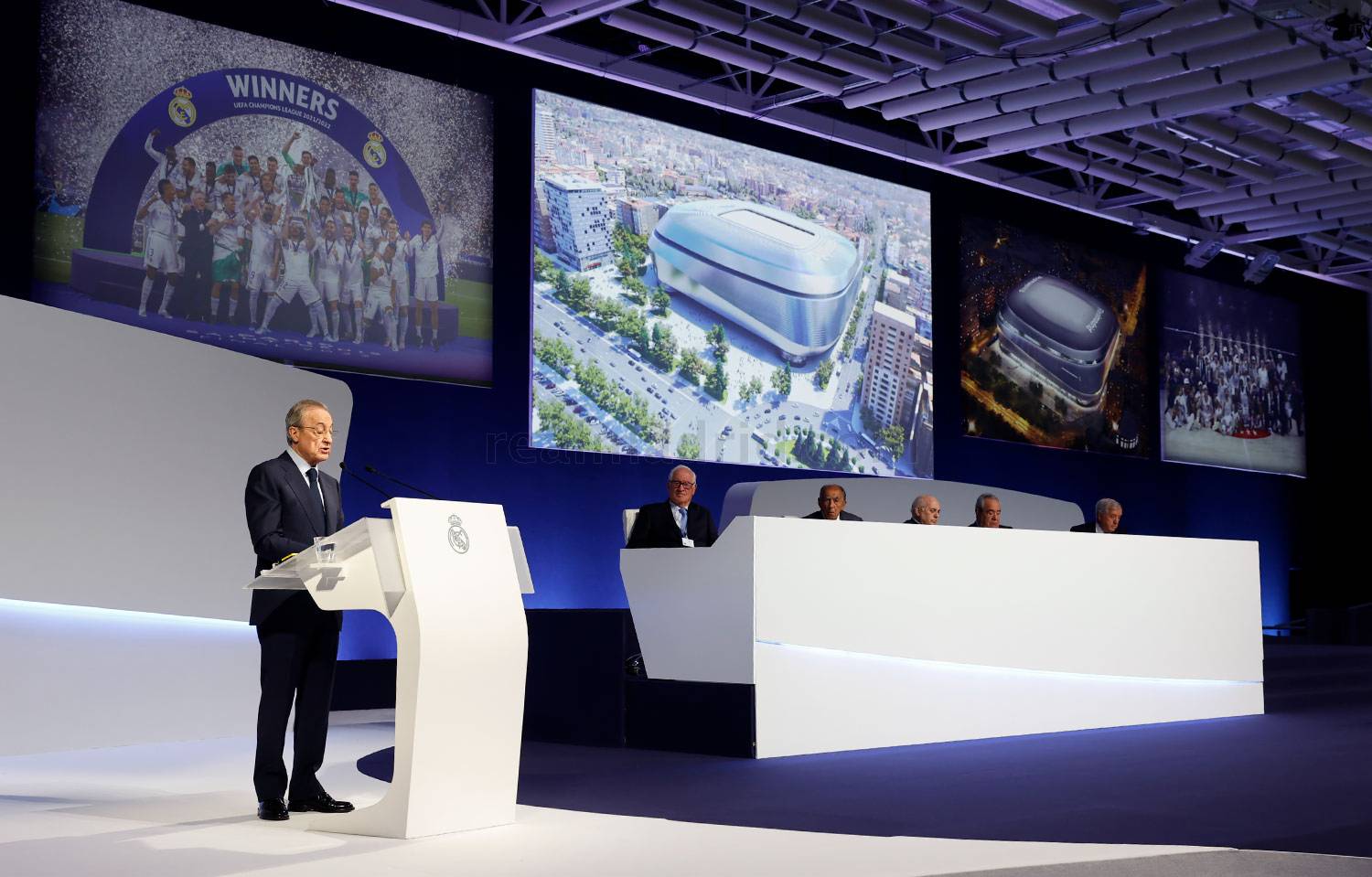 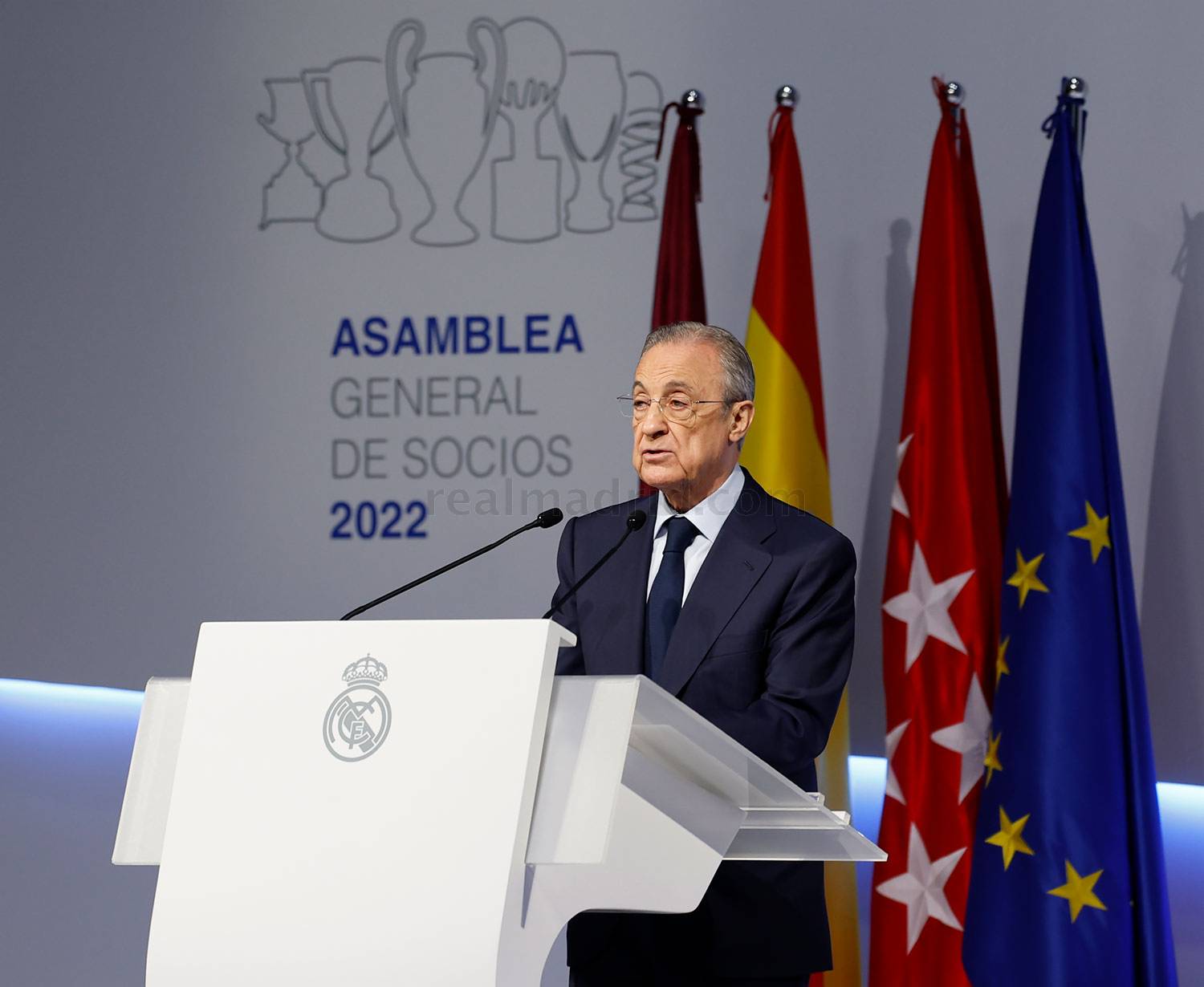 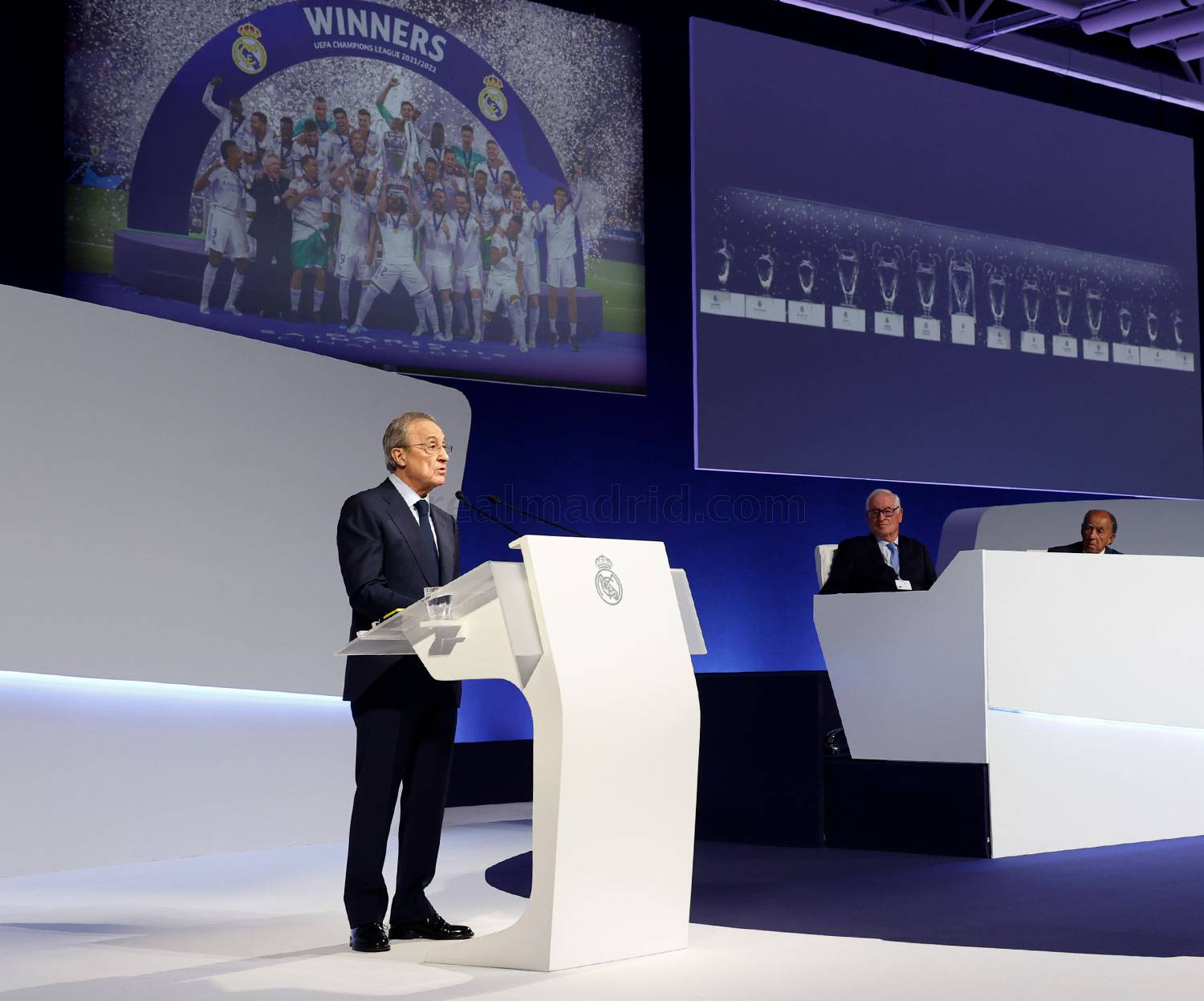 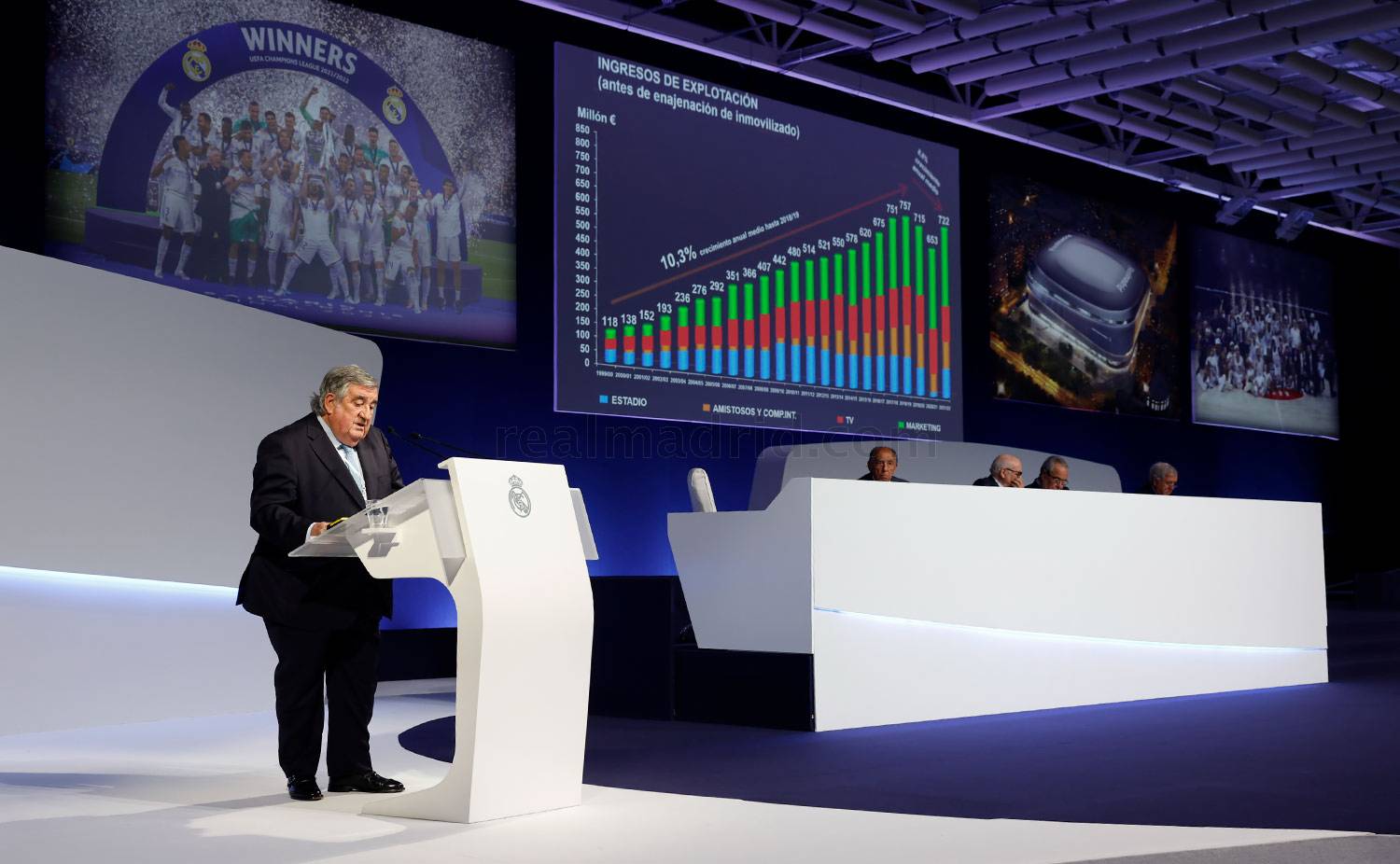 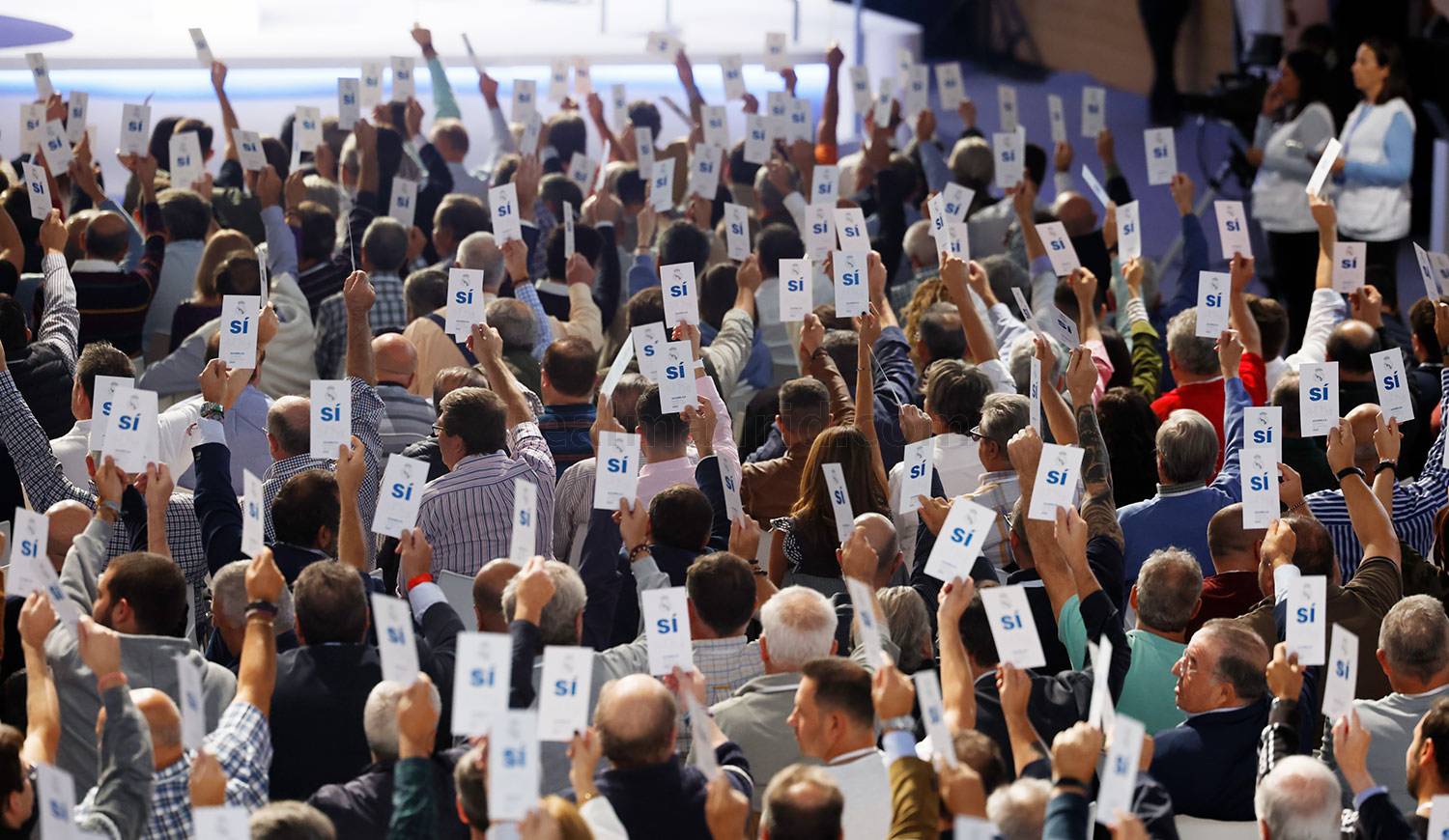