The league leaders beat Barça at the Palau Blaugrana to remain unbeaten on their travels and register their 14th win in a row.
Palau Blaugrana

85
87
The notable absences of Randolph, Deck and Thompkins, nor the presence of Gasol, nor Barça's good form, who had won 16 in a row, could prevent Real Madrid from continuing their spectacular run in the league. Laso's side improved their lead at the Palau and are now three wins clear of the Catalans with seven games left in the regular season. The madridistas have now won 14 games, equalling their best away start in the ACB (15) and remain unbeaten on the road. A great team performance, led by Rudy (13 points) and home-grown players Garuba and Tristan (11 each), key to the win over the blaugranas in a Clásico that was decided in the final seconds with a great move from Laprovittola (12 points).

Madrid were quick out of the blocks, defending well and with a high tempo on the offensive side. Madrid prevented Barça from scoring in the first three and a half minutes, a period in which they went on a 2-11 run with Tavares and Tyus dominating in the paint against Mirotic and Gasol and doing damage on the offensive rebound. Calathes and Higgins kept the blaugranas in it at the start, but it was Laso's men who took total control of the game with Laprovittola leading the way (6 points) in the first quarter (15-20 min.10).

Madrid, superior
The Whites continued to be solid at the back thanks to some great work both on the outside and in the paint. Barça struggled to score against a Real Madrid side with hardly any flaws (only three turnovers in 20 minutes). They relied on Smits and Kuric to get within three points at 22-25 at the midway point of the second quarter. That was the closest the Whites came in the first half. Laso's rotations sustained the level in attack with another good run, 0-11, taking off again on the scoreboard. Llull, Rudy (8 points) and the great performance of youngesters Garuba and Tristan, replacing Tavares with two fouls, meant that Laso's team went into half-time with a 9-point lead (33-42).

As soon as the second half got underway, Real Madrid suffered a third foul for Tavares. A setback that they dealt with at first by focusing on the game and Abalde inspiring from the three-pointer. Two in a row, for 7 points, opening up a gap of 35-49 at the 23' mark. Barça, however, started to grow in to the game thanks to a more intense defence. The pressure and points from Mirotic and Calathes sparked the reaction from the hosts in the following exchanges. Real Madrid weathered Barça's push with Rudy, who carried the team on his shoulders on the offensive end to stay on top at the end of the third quarter (57-59).

White pride
Barça, who seemed to have seized the initiative, did not expect Madrid's reply. They turned the situation around with Rudy spearheading an excellent defence, which surprised and unsettled their opponents, and Causeur as the offensive focal point. Between the Frenchman, Tristan and Llull, from 6.75m, Madrid gained a 13-point lead at 61-74 in the 34th minute. Maintaining that pace was difficult and Jasikevicius' men went all out, cutting the lead to four points with a minute and a half to go (74-78). Another triple from Tristan and a 0-5 run looked to seal the win for the visitors at 74-83 with 40 seconds to go. But it was not to be and a Mirotic three-pointer put the finishing touches to a surprising comeback by the blaugrana with just 10 seconds left to play.

Laprovittola secures a deserved win for Madrid
Laso's men weren't going to throw away their big push. Their ability to overturn the deficit shows no limits and despite the knocks, they got up to win the game with a great play from Laprovittola, who hit a 2+1 to make it 85-87. The team rounds off an excellent week, with two big wins away from home against two of the best teams in Europe, Fenerbahçe, which saw qualification for the Euroleague playoffs, and Barça. 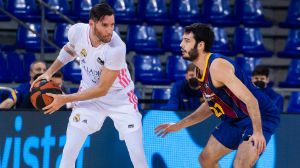