The leaders, with six players posting 10 points or more, downed UCAM Murcia in the rearranged Round 19 match-up. Tavares turned in an unstoppable performance (16 points and 15 rebounds).
WiZink Center
98

87
Real Madrid retained top spot in the league after downing UCAM Murcia at home in the rearranged Round 19 match-up to claim a 19th win of the season and guarantee that the team heads into next week's Copa del Rey top of the pile. On this occasion, the team had to overcome an excellent first stanza from the guests and stage a third-stanza fightback in what proved to be a demanding contest, with a decisive 26-9 run. This victory was a real team effort with six players posting double digits in the scoring and PIR stakes, paced by a double-double from Tavares (16 points, 15 rebounds and a PIR of 29).

The strong start from the guests, who were defensively aggressive and enjoyed great success in making points (Radovic 9 points, Davis 8 and Frankamp 6), surprised Real Madrid, who was forced to quickly get a grip on the frantic tempo of the game. The team did just that thanks to two of the youngest members of the roster in Alocén and Garuba. The point guard once again stepped up to the plate (eight points and two assists) and inspired Pablo Laso’s charges, whilst Garuba was at his scoring best as he netted 10 points in the first quarter (24-32).

Madrid wakes up in defense
The Whites upped their defensive intensity and with the pressing in the zone masterminded by Laso, the hosts managed to reduce the guests’ scoring return by 13 points compared to the game’s opening stages. A 11-2 run led by Llull, who posted eight points, put the team ahead for the first time in the 15th minute (35-34). The important thing for the Whites was to change the pattern of the game and they did just that. UCAM Murcia no longer felt so comfortable in attack but continued to have an extra bit of energy in its play and enjoyed further success from the outside through Frakamp. Real Madrid, who now had a real grip on the game, still had to solve the issue of offensive rebounds. Taylor posted a further eight points in the final stages of the first half to ensure that the leaders ran out 23-19 winners in this stanza (47-51 at the break).

Madrid came out after the restart intent on tipping this even affair in its favour and was far more aggressive. Tavares began to get the upper hand in the paint and became more influential as he cut the guests’ advantage through rebounds. In the space of two and a half minutes, he tore up a 9-0 run that put the hosts back in front against a Murcia side who still continued to put up a fight, this time through Radovic (60-57, min.27). The league leaders had upped the stakes in defense, now with individuals shining, and weren't about to let the standards slip. Causeur, both in his dual against Frankamp and offensively (seven points) put the team well on top and Rudy, with back-to-back trays, rounded off a 13-0 run to establish the biggest lead of the night (+16) and make it 73-57 in the 29th minute after a  devastating third quarter (26-9).

Whites march on to victory
The guests weren't about to give up on the game after having gone all the way against Real Madrid. However, the Whites now had a healthy lead that hovered around the 10-point mark on the basis of its solidity at both ends of the court and responded to the guests’ efforts with all members of the team contributing. Tavares, who had already recorded a double-double (he ended the game with a PIR of 29), Deck, Llull… In short, the team once again showcased its strength in depth with six players posting over 10 points in the scoring and PIR stakes against opponents who competed very well but ultimately struggled to worry Madrid in the final throws (98-87, min.40).  The Whites are next in action on Friday, when Baskonia are the opponent's in the EuroLeague (9pm CET). 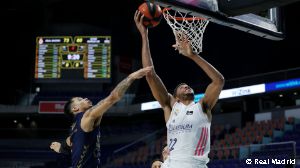 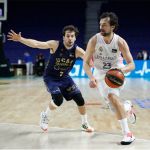