The team opened up a 22-point lead before half-time that proved decisive in its 14th EuroLeague win. Deck was decisive with 29 PIR.
WiZink Center

66
Real Madrid kicked off this week's EuroLeague double-header (on Friday the team will visit Alba Berlin) with an authoritative victory over Panathinaikos at the WiZink Center. Laso's charges, who recorded their 14th win in the competition, set the tone for the victory in a sublime first half display. They went into half-time with a 22-point lead that they managed to hold on to despite the visitors' persistence. Deck put in a great performance (20 points, his best score as a Madrid player, and 29 PIR). Alocén also set a new career high with 13 points and 4 assists. Rudy and Llull were both back in action - the latter played his 300th game in the Madrid jersey in this competition.

This was the thirty-first meeting between two of the fiercest rivals of the last decade and it began with Real Madrid dominating in all areas of the game. In defence, the hosts kept Mack and Nedovic at bay, Panathinaikos's main scoring threats, and they were far superior on the rebounds. Deck was the difference in offence with a sensational first quarter (10 points, 4 rebounds and 17 PIR), with Taylor (8 points) and Thompkins also doing their part (3 assists). The Whites ended the first 10 quarter with a 13-point lead (25-12).

The biggest lead
The return of Llull and Rudy provided even more good news for Real Madrid. This gave the side more depth for the rotations, which allowed Madrid to maintain a very high level of play. This was helped by Causeur (3/3 in three pointers for 11 points), Alocén in his best scoring form (9), and Tyus chipping in with a very solid defensive display (2 blocks), making it impossible for the Greeks to keep up with the play. Another great second quarter (24-15) took Madrid to the break with the clearest lead of 49-27 on the scoreboard.

Panathinaikos improved after the restart. The visitors were more aggressive at the back and managed to create more chances compared to in the first half when the hosts made it impossible for them to do so. Nedovic and Auguste led a scoring run that gradually increased as the minutes went by, with the home side now lacking offensive rhythm and showing less intensity in defence. To make matters worse, Carroll went off injured in the 29th minute with a sprained ankle. In the midst of the Greeks’ resurgence and with the score at 58-49, three baskets by Deck in the last minute of the third quarter gave the team some breathing space as the final stretch approached (64-50, min. 30).

A decisive response
Madrid found it tough to break down the opposition defence. The team struggled to clock up points as Panathinaikos began to show its quality. But it was Deck once again, who broke his personal scoring record for Real Madrid with his 20th point, which kept the hosts going in spite of the pressure by the Athenians who, with a three-pointer from Foster, made it 66-61 on the 35' mark. Then Madrid dug deep to produce its best run of play. A three-pointer from Abalde and five straight points from Llull, along with defensive determination and solidness, halted the visitors’ inertia and allowed Laso's men to see out a deserved victory (76-66, min.40). In 48 hours, the Whites face Alba Berlin (Friday, 8:00 pm CET). 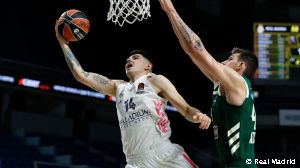 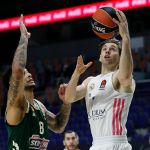