The Whites beat Casademont Zaragoza, the same opposition they faced for the last home match almost seven months ago. Causeur (25 points) and Rudy scored 10 of the 19 Madrid three-pointers.
WiZink Center
102

83
Real Madrid returned to the WiZink Center after an absence of 6 months and 17 days. Although there were no spectators present, it was a long-awaited return home since 8 March, the month in which all competitions were suspended due to the coronavirus. On their return, the Whites beat Casademont Zaragoza to record the second victory in the league. In the match the difference was made in the first and third quarters with a 54-30 run. Madrid was decisive from the three-point line, with five from Causeur for 25 points (his best score in the league) and another five from Rudy (16). Campazzo (11), Garuba (8) and Tavares (12) also stood out.

Real Madrid had a spectacular start, with an intense, aggressive game, dominating the rebounds and with great shooting percentages. Their opponents struggled to respond and soon established the first important advantage with 26-8 in the 9th minute after a 19-2 run of points. Causeur (8 points), Garuba (6 and 7 rebounds), Campazzo and Tavares (6 each), scored the points for the Whites in a first quarter that ended 26-13.

Containment work
Madrid dropped off the pace slightly in the second quarter and the visitors raised their game considerably and began to hurt the home defence. Sulaimon was instrumental and helped his team get back into the game again with 16 points in this period. Brussino also played his part and Casademont Zaragoza reduced the difference to one point at 39-38 in the 19th minute. It was Rudy who then stepped up for the Whites when they most needed him. His seven points, including two triples, and one more from Alocén in the last play of the first half, allowed Laso's team to stay ahead and go into the break with a +6 advantage (47-41).

A triple from Causeur straight after coming on signalled the start of the Madrid exhibition. The Frenchman took centre stage with a fine performance from the three-point line. He notched up his fourth and fifth three-pointers of the night while the hosts defence held strong. Tavares made his presence felt in the area and Campazzo, Abalde and Alocen joined the attack. 19-3 and a 22-point advantage for the hosts with the score at 66-44. The advantage later decreased slightly at the end of another brilliant third quarter for Laso's team (75-58).

Madrid decisive from three-point line
Casademont Zaragoza proved to be resistant with a good spell from former Real Madrid player Barreiro (78-67, min. 33). But it was not enough to disrupt a Madrid side that was on fire from the three-point line. Rudy also got in on the act with five triples and Deck added two more for a total of 19 for the Madridistas. Causeur broke his scoring record for Real Madrid in the league and the Whites sealed a brilliant victory with over 100 points (102-83, min. 40). In less than 48 hours they have a new league meeting away to Joventut (Sunday, 6:00 pm). 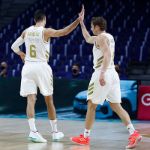