The players and coaching staff celebrated winning the Club World Cup for a third consecutive year out on the pitch.
The Madridistas celebrated out on the pitch on the Zayed Sports City Stadium. After they picked up the trophy and the club president Florentino Pérez congratulated the players and coaching staff, the celebrations began as Sergio Ramos lifted the Club World Cup. The champions did a victory lap to share the trophy with the fans and then posed for a photo under the goal mouth, leaving a lasting memory, like the moment when Marcelo cut some of the net. 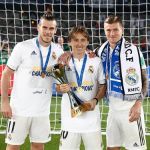