The Golden Glove at the World Cup in Russia strengthens the European champion’s squad.
Thibaut Courtois (Bree, Belgium, 05/11/1992) is now a new Real Madrid player. The Golden Glove from the last World Cup signs for the Champions League champions after his impressive performance in Russia. His saves were decisive as Belgium finished in a historical third position which saw him chosen as the best goalkeeper of the tournament.

At 26 years of age, Courtois has already gain extensive experience in European football. He has won the league in Spain, England and Belgium and stands tall at almost two meters high (1.99m) and his ability between the sticks. He came through the youth categories at Genk, he made his debut with the first team in the 2008/09 season and settled there for two seasons. In 2010/11, the last one that he played in Belgian football, he was a key player in the winning of the league and voted goalkeeper of the year.

The least number of goals conceded in Primera
In the summer of 2011 he signed for Chelsea, after three seasons at Atlético de Madrid. At the red and white club he won the Europa League, the European Super Cup, LaLiga and the Copa del Rey. He won the Zamora Trophy twice (2012/13 and 2013/14) and was included in the team of the year (2013/14). During this spell he made his debut with the Belgium senior team. It was in November 2011, at the age of 19, that he became the youngest goalkeeper in history to make his debut with the Belgian national team. 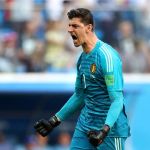