Florentino Pérez congratulated the league champions.
The end of Game 4 of the final at the Buesa Arena prompted scenes of great joy amongst everyone in the Real Madrid camp. The team are the newly crowned league champions, with this the 34th title secured in the club's history. Felipe Reyes and Llull lifted the trophy out on the court as the players and coaching team celebrated the triumph. The celebrations then continued on in the locker room, where club president Florentino Pérez congratulated the champions, posing for photographs, including having a selfie taken with Llull, a true image of this legendary Real Madrid team. 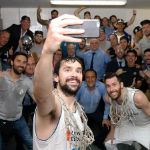