"Real Madrid is a feeling of belonging that unites us all, you supporters' groups are the heartbeat of madridismo", declared the president.
Ahead of the Club World Cup final, Abu Dhabi was the setting for a true celebration of madridismo. The Rosewood Hotel played host to a gathering which brought together around 500 members of Real Madrid supporters' groups. Florentino Pérez, who was given a standing ovation by the fans and posed for photographs with all in attendance, presided over an event which featured strong representation from the club and that once again proved that the allegiance to Real Madrid is one that transcends borders.

The president addressed the fan club members to express his thanks for their support: "It's an honour to be here in this great country and be defending a title as prestigious as the Club World Cup. This would be the first time that a club has lifted the trophy for a second successive year and this team will be giving its all to do so".

"Right since we arrived in Abu Dhabi we've felt right at home. You've shown us your affection and we're extremely grateful for such a great welcome. Real Madrid is an allegiance that unites us all. You have a key role to play today in trying to achieve what's a big challenge".

"It's been a year of successes and trophies and we now want to once again be crowned world champions, for a sixth time in our history. It won't be easy because we're up against the Copa Libertadores holders, Gremio, a great club that we congratulate for reaching the final".

Role of the supporters' groups
"The supporters' groups are the heartbeat of madridismo and you have a vital role to play in passing on our values. We're united by this badge, its values and a feeling of belonging. This club has not barriers or boundaries. Origins, nationalities, languages, religion and culture are of no importance. We're Real Madrid because we love this shirt and everything it stands for".

Following the president's address, the supporters' groups were presented with a commemorative flag. During the course of the proceedings, the fans sung the La Décima anthem and enjoyed watching several videos featuring the team's crowning moments. The supporters also had the opportunity to pose for photos with Raúl, Emilio Butragueño and Roberto Carlos. 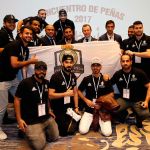