The Whites beat Sevilla 3-2 in extra time with goals from Asensio, Ramos and Carvajal.

Madridismo witnessed another unforgettable night in it's rich history with the team winning their third UEFA Super Cup. The 3-2 victory against Sevilla turned out to be a real epic thanks to a goal from Ramos in the 93’ minute, which took the game to extra time, and Carvajal's match-winning goal in the 119’ minute. Earlier on, Marco Asensio scored a stunning goal on his official debut to turn the scores in Real Madrid's favour, while Franco Vázquez and Konoplyanka scored Sevilla's goals.

The Lerkendal Stadion in Trondheim (Norway) was the stage where the match took place on the 9th August 2016. Real Madrid added to their tally of success in finals making it six titles in a row in these matches, while Ramos played yet another sublime role in a decisive moment. The defender acted as he had previously in the Décima winning final two years ago. He levelled the scores in the dying moments of normal time when the game looked to be all but over. His performance led to him being named the best player of the Super Cup.

Ramos, man of the match

Zinedine Zidane also made history in Trondheim by becoming the first madridista to win the UEFA Super Cup as a player and manager. The Frenchman was in the starting line-up for the game which saw the club win the title for the first time, beating Feyenoord 3-1 in 2002 in Monaco. As a coach, he is now the third Real Madrid super champion of Europe after Del Bosque and Ancelotti. Whilst celebrating on the pitch, Zidane congratulated each of his players individually for the win.

After Ramos lifted the trophy, the squad and coaching staff celebrated on the pitch and in the dressing room. The joy of winning the trophy even spread to the press room, where the players surprised Zidane.

Real Madrid started the 2016-17 season by adding to their haul of trophies, a point which particularly pleased Florentino Pérez as he stated: “We are really happy because winning the UEFA Super Cup is no mean feat, and we have won it following our last three Champions League titles”. The Real Madrid club president greeted the players at their hotel. 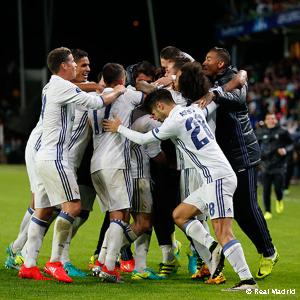