The Whites won 3-0 against Barcelona in the final and have won the season's four titles. Llull was MVP.
Palau Blaugrana

90
Real Madrid were crowned league champions for the 32nd time after beating Barcelona in the final by a resounding 3-0. The Whites won the decisive game at the Palau in a third match that was decided by brilliant team play, with five players scoring more than 10 points and led by Carroll's 19 points. Real Madrid have had their best season ever after winning the European Cup, the League, Copa del Rey and Super Cup. No Spanish side had previously managed the feat of winning four titles.

The first game at the Palau began with Xavi Pascual making changes with Hezonja and Doelllman, who were his best men in Madrid, coming into the starting five, in order to try and surprise the visitors. That did not quite go to plan, despite the work of Tomic, who dominated from the paint with points (12) and rebounds. The Whites responded to the home side's start with their standard home game, with Rivers (5) and Rudy (4) standing out, to keep the first quarter even (17-17).

The second unit break the balance
What makes this Real Madrid side different, is the depth of their squad. In the second quarter they displayed their collective power, upping the intensity level with the emergence of substitute players. It was the turn of Sergio Rodríguez, Carroll, Nocioni and Slaughter, with Ayón playing the key role in the paint after Reyes was sanctioned for two fouls.

Madrid enjoyed their best period of the game. They punished the Barcelona defence from the perimeter. Four three-pointers, two from Carroll (8 points), another from the highly versatile Maciulis (7+5 rebounds), and one more from
Sergio Rodriguez, along with improvements in defensive rebounds, gave them a maximum lead in the 17' minute with the score at 26-40 following a 9-23 run (17-31 in the quarter). By that stage, the 10 Madrid players with game time had all scored. Barcelona were unhinged by the solidity of the Whites (Satoransky was penalised for an unsporting foul after sticking an elbow in Ayón's face), and continued to depend on Tomic for three-pointers from time to time, as well as Doellman (34-48, min 20).

Barcelona put the squeeze on in the third quarter. Spurred on by their fans, and with one foot in the grave they found a way of playing Madrid that lowered their intensity at the back. Llull, Reyes and Rivers held the Barcelona charge at bay with isolated baskets (51-62 in the 27’). However, Barcelona with the energy of the Satoransky, Oleson, Abrines (11 points) and Tomic (22) quartet, ended up making a comeback with a 16-0 run between the 27' and 30' minute. It was only interrupted by a three-pointer by El Chacho on the buzzer at the end of third quarter (67-65, min. 30).

Madrid Reaction
Laso returned to the formula that had worked so well in the second quarter, with five warriors. It worked out very well. The Whites got their confidence back in defence in order to stem the blood flow of their opponents. With El Chacho scoring two consecutive three-pointers, at the end of the third quarter and beginning of the fourth, Carroll and Nocioni taking on an attacking role and Maciulis having a perfect game at both ends of the court, Madrid made a dramatic turn around to the dynamic of the game with a 19-6 run (73-84, min. 26’).

Carroll decides the game
The home side did all they could until the end. A 10-2 run led by Tomic left them three points behind heading into the last minute with the score at 83-86. However, Madrid wanted to make history. Carroll, the leading scorer in the game (19 points), scored a decisive basket with 14 seconds left and Oleson defending close in on him in order to make it 83-88. Llull responded with two free throws after a basket by Tomic, with 8 seconds to go, and in the next move, he sealed the league title with some great defence (85-90, min. 40). 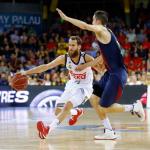