Real Madrid carried out the traditional charity collection to raise funds for the Spanish Cancer Association.
This year Real Madrid have once again collaborated with the Spanish Association Against Cancer (AECC) by setting up a charity table located at the entrance to the box of honour at the Santiago Bernabéu. Different personalities from the club came to deposit their contribution and the funds raised will go towards financing programs carried out by the Association.

The president Florentino Pérez came to the table to make his donation, as did Emilio Butragueño, director of Institutional Relations. From the first squad, Lucas Silva, Keylor Navas and Fernando Hierro participated in the charity work. The basketball team was represented by Slaughter.

Football and basketball veterans
The former player and academy coach, Santiago Solari, was one of the first to come to the table and he expressed his support: "It is always good to have these types of initiatives”. Other veterans such as Zoco, Miera and Amancio also took part, and the latter said: “Real Madrid are at the forefront of this type of work”.

The former basketball players were represented by José Antonio Muñoz, Paniagua and Rullán. The latter explained: "Madrid always contribute to important causes and this time it is to raise money against cancer". 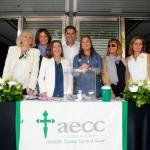