“It was a crucial match in front of our supporters”, said Carvajal.
Luka Modric started his first match following his injury and described his feelings after the Levante clash: “I think we played a good game, especially in the first half. I felt great and was delighted to start my first match. I still have a bit to go but this match was good for me. Now I need to get into the rhythm of playing again. I'm satisfied with today's encounter”.

“It was a very important win and will help with our preparations for the Barcelona match. It is going to be a very tough encounter. They keep the ball very well but we just have to focus on our game. We need to stay true to ourselves and make the most of our chances. We have to be united both in attack and defence”.

Ramos's recovery
“It is hugely important to have Sergio back with us. His character and quality are important for this team”.

Carvajal: “The best is yet to come and we have to give it 100%”
“We knew this would be a crucial match in front of our supporters as well as for us ahead of next week's game. We picked up three points, kept a clean sheet and now the aim is to beat Barcelona”.

“We haven't had a good month but there is a long way to go. Any team would happily take our situation. We are through to the Champions League quarter-finals, unlike a lot of other teams, and it is in our hands to win La Liga. We are at ease and have to face what's left with enthusiasm”.

Traveling to Barcelona
“We have no doubts in our minds heading to the Camp Nou. The team and the system are the same and I think we are more united now and mentally prepared for good things to happen. We have to give it 100% and we are aware that we are capable of beating any side. This is a Clásico and there is no favourite. I wouldn't settle for a draw, we're going there to win”.

Ramos's recovery
“He is a great player and his presence on the pitch is clearly felt, but we have a very deep squad that is able to provide cover”.

El Clásico
“The Camp Nou game will be huge, it's a Clásico, with top spot to play for. We are going there with the intention of playing a great game and we hope to come away with a victory. If we win, it would be a very important step towards the end of the championship. If we lose, there is no need to lose our heads and we'll keep on working”.

Adapting
“European football is faster and more intense. I feel like I've adapted somewhat already, even though I'm not at 100% yet. We'll take it bit-by-bit. I don't know how much time I'll need, although I hope I'll get there as soon as possible. I can play in the holding role in midfield or to the side. The manager makes that decision. I'm comfortable in either position”. 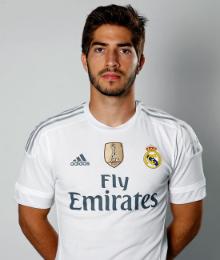