A Cristiano Ronaldo header and a Marcelo cracker sealed the win against Schalke 04 in a knockout tie that will decided in the Bernabéu.
Veltins-Arena
0

2
The Champions League returned and Real Madrid demonstrated in the Veltins-Arena that their objective is still to become the first team in the history of the competition to retain the continent's most prestigious title. Against Schalke 04, the Whites recorded their seventh win, a victory that paves their way towards the quarter-finals.

The Madrid players, who dominated the encounter from the kick off, were extremely solid, were able to keep a clean sheet and scored two highly valuable away goals. The first came four minutes before the half-hour mark. Carvajal took on Boateng, cut inside and crossed the ball with his left foot. Cristiano Ronaldo, more alert to the chance than anyone else, made the most of the space that only he could see between the defender and Wellenreuther to beat the German keeper with a deft header.

Real Madrid had accomplished the hardest task against a rival that had closed up shop at the back and now had to push forward. It did not play out like that and the Whites came close to doubling their lead before the break. Benzema had an chance in the 31’, after Kroos found him with a great pass between the lines, but Wellenreuther was able to smother the Frenchman's shot on the second time of asking. Cristiano Ronaldo could have scored another four minutes later. The Portuguese star's free kick, which was goalward bound, forced the home team's goalkeeper in to producing a fine save.

Unbeaten
While Madrid had achieved their objective of scoring in the first half, they were able to do so again after the half-time break against a side that allowed them to control the game. Real Madrid duly accepted the German outfit's strategy and enjoyed the lion's share of the possession in their search for a second goal, which came in the 72’. Isco linked up with Bale, the Welshman teed his team-mate up with a back heel but the former's shot went over the bar. Two minutes later, Platte had a similar effort, but his strike crashed off the woodwork.

Marcelo's work of art
Despite the scare, the Whites were deserving of more and their persistence paid off in the 79’. Cristiano Ronaldo passed to Marcelo, who, on one of his countless runs up the wing, allowed the ball to roll ahead of him and caught Wellenreuther off guard with a right-footed strike from outside the box which ended up in the top corner of the home team's net. That was to be the climax of a hard fought match for the Madrid players, who were solid and took a giant step towards reaching the Champions League quarter-finals. The tie will be decided in the Bernabéu on 10 March. 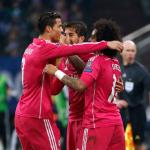