The Portuguese star's historic treble saw Real Madrid complete a comprehensive win over Celta and make it 18 wins in a row.
Santiago Bernabéu

0
Real Madrid remain unstoppable in the exceptional end to 2014 that they are posting, and against Celta - who had won at the Camp Nou and drawn at the Calderón - they stretched their historic run of consecutive wins to 18. No faults can be found in a team playing with togetherness, effort and unbelievable quality, and playing football drawing praise from every quarter. If you add to that Cristiano Ronaldo, the best player in the world, the result is a mix that is making history.

Eager to demonstrate why they have been La Liga leaders since the tenth matchday, Real Madrid came out in dominant mood. Ramos, in his 300th appearance for the club in the league, came close to putting the hosts ahead after 10', but the vice-captain was unable to find the target when the loose ball fell to him as Sergio parried a Ronaldo header from Kroos' corner.

Three minutes later, Jonny prevented Madrid from scoring after a stunning counter-attack. The break was begun by Benzema, was continued by James and it was the defender who was in the right place at the right time to clear, denying Cristiano as he shaped up for a first-time shot in front of goal.

The home side were enjoying their best minutes, and brought the fans out of their seats on 17'. Illarra crossed to the far post and Cristiano Ronado produced an acrobatic overhead kick that only just cleared the visitors' crossbar. The beauty of the effort deserved better. Ten minutes later, Cristiano was once again at the centre of the action as Marcelo sent a 30-metre sweeping pass but the Portuguese, who brought the ball down with his chest and shot on the half-volley, came up against an inspired Sergio.

The hosts were overwhelmingly in control, so much so that in half an hour they had had eight shots to their rivals' zero. And their just deserts came on 35'. Cristiano Ronaldo was brought down in the area by Jonny as he looked to meet a Marcelo cross, and the forward picked himself up to convert the penalty. He has now scored in 17 straight La Liga matches at the Bernabéu. That was the score as the teams went into the break after a vibrant, uncompromising first half.

A clean sheet in four of the last five matches
Real Madrid came back out ready to settle the match against a tough Celta side who were showing their worth on the road. An enforced change saw Arbeloa replace James, who departed with an injury seven minutes after the restart, and on 65' the Whites extended their lead. Cristiano was again the goalscorer, taking advantage of a poor clearance from Cabral to beat Sergio on the volley.

The Portuguese did not stop there, claiming yet another hat-trick. Marcelo crossed after 81' and Ronaldo made no mistake with his left to seal a treble that means he has scored three or more times in more La Liga games than any other player in history. Spectacular from Cristiano, who is now on 23 goals in the Spanish top flight, and from his team. They have 18 consecutive wins and have kept a clean sheet in four of their last five encounters. 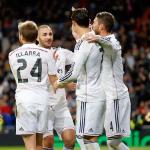