0
Real Madrid are unstoppable and they racked up a sixth straight win against Athletic ahead of next week's international break. The Whites enjoyed themselves out on the pitch and ensured that their supporters did as well in a packed Bernabéu. The goal fest did not take long to get started. The Madrid players only needed two minutes in order to demonstrate just how spectacular their form has been of late. A ball swung in by Bale from the right found the head of Cristiano Ronaldo and the Portuguese man was able to beat Iraizoz with a deft finish. With his header, Ronaldo scored in his eighth consecutive match.

Athletic barely threatened and Real Madrid kept creating clearer and clearer chances. The Whites completely dominated possession. A second goal looked like it would come soon and it almost did in the 40'. Bale linked up with Benzema and a block by one of the away side's defenders fell to Cristiano Ronaldo, but he was unable to get past Iraizoz in the resulting one-on-one. That was the last bit of play before the second goal came. Benzema finished off a Modric corner with his head.

The Frenchman, who closed the first half for his team with his goal, found the back of the net for another time in a week in which he was decisive in Sofia, getting the winner against Ludogorets. The second half started much like the first. While Cristiano Ronaldo hit the mark in the 2', Bale almost did the same five minutes after the restart. The Portuguese forward provided the assist, but the Welshman skied his shot over the crossbar in a one-on-one with Iraizoz.

Bale's second assist
The third came five minutes later. The same men from the previous chance on goal were at the centre of things again, albeit with their roles reversed. This time Bale was the provider and Cristiano Ronaldo had the job of tapping the ball over the line. The Portuguese man's appetite shows no bounds and he has now become the first Real Madrid player to ever score 12 times during the opening seven La Liga matches.

The Whites were like a force of nature and in the 56' they produced a memorable bit of play. Benzema received the ball on the edge of the box and, just as it looked as though he would play the ball back, he saw James running between the lines and passed to him. The Colombian's first-time back-hell to Bale was top quality, however, the Welshman's shot was off target.

The spectacle went on
The connection the players had with the Bernabéu was plain to see and it did not take long for the fourth to come. Cristiano Ronaldo could have scored it but instead he left it on a plate for Benzema in the 69’. Real Madrid were in exhibition form and if it had not been for Iraizoz, they could have won by an even greater margin. The Athletic keeper pulled off a string of reflex saves, denying a Ronaldo header from going in to preventing Bale in a one-on-one.

But before the final whistle, Ronaldo's hard work was deservedly rewarded. A Modric corner fell to Pepe and his shot came off the Portuguese forward's body before going in. Luck was on the striker's side, and now, alongside Zarra and Di Stéfano, he has scored the most La Liga hat-tricks of all time. It was the perfect way to cap off a deserved goal blitz. 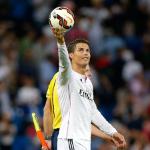