An early goal from Jesé and that of Benzema, who finished off a counterattack, practically sealed victory inside half an hour, while Modric put the game to bed in the second half.

3
Real Madrid filled its boots against Getafe in the Coliseum Alfonso Pérez, as its exceptional spell of form continues. In less than half an hour the Whites had almost sewn things up with an early goal from Jesé, who has found the net in three La Liga matches on the trot, and that of Benzema, who put the finishing touches on a counterattack. Modric, true to form, closed out the victory in the second half. The visitors, who kept a clean sheet once again and are still unbeaten in 2014, keep their share of the lead.

Real Madrid did not take long to show the Coliseum Alfonso Pérez that it is not willing to lose touch with Barcelona and Atlético, with whom they started the weekend level on points. Five minutes was all Jesé needed to come up with a beautifully-crafted goal, demonstrate his excellent form and put his team in front. Di María recovered the ball and found Bale with a header, who in turn set up the youth-academy player. It was an exquisite finish. The Canary Islander broke into the box, took on Valera and produced a wonderful curling shot whose accuracy proved too much for Moyá to prevent the first goal.

Madrid now had the advantage, however the visitors continued to dictate the tempo at their whim. Bale took a pop in the 21st minute, but the home keeper was up to the task set by his long-range effort and eventually managed to hold on to the ball. The second goal came six minutes later from a text-book counterattack. Pepe cleared a Getafe corner with his head to leave a loose ball on the edge of the box. Jesé latched onto it and found Di María, whose cross Benzema cushioned with his chest before slotting a classy finish past Moyá from the penalty spot.


In less than half an hour, Real Madrid was already providing a shooting masterclass and had practically wrapped the game up. They could even have added another after 33 minutes, but Bale failed to convert a one-on-one with Moyá. There was no respite in the second half, which started frantically, and within three minutes each side had had a clear chance to score (Colunga and Di María). It was end-to-end football and Jesé could have taken advantage of it, but his 51st minute shot was wide of the mark.

Getafe, above all from set-pieces, were intent on getting into the match, but Real Madrid were having none of it. A minute after catching the home defence off-guard with a spectacular ball to Di María, which the Argentinian was unable to finish, Modric controlled the ball on the edge of the area and beat Moyá when the clock read 66 with a precise shot that marked the end of the goal-fest. Madrid are still co-leaders and remain unbeaten in 2014. 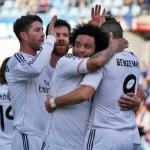