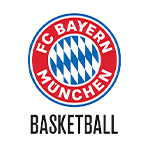 The Whites pick up their sixth EuroLeague victory after defeating Bayern in the final seconds of play. Yabusele, with a PIR of 23, was the standout player.

Real Madrid overcame the first hurdle of a weekend involving two official matchups, as Pablo Laso's side clinched victory away at Bayern Munich (76-80) in the eighth round of EuroLeague fixtures. Madrid secured the spoils in the last minute of a hard-fought game to record a sixth win in European competition. Yabusele, with 21 points (his best score for Madrid), proved to be the match winner in the final moments of the clash.

Real Madrid got off to a strong start at the Audi Dome, showing great defensive focus in the early stages. Tavares and Yabusele produced some inspired play at the back (five rebounds between them) and in attack. The Whites opened up a five-point lead, but in the final stretch of the first quarter the home side responded powerfully thanks to the offensive contribution of Rubit (7 points in a row). The first quarter ended with the scores level (13-13).

More intensity from Madrid
The difficulty Laso's charges were having from the perimeter soon vanished with two three-pointers from Llull. Both Vukcevic and Llull managed to hold off the home side's onslaught, but the Germans were employing a very physical game. The madridistas refused to be pushed back, however, and extended their lead courtesy of an unstoppable Poirier under the hoop (nine points and four rebounds). Yabusele, Taylor and Causeur made their contributions in attack and the visitors went into the half-time break 32-43 up.

Bayern rallied mightily through Hilliard (11 points) and Walden after the restart. But when the home team got to within four points, Abalde stepped up with seven straight points to give Madrid some much needed breathing space. The intensity of the German side in attack, the turnovers and refereeing decisions brought the score back to level terms (53-53). But Madrid kept fighting and move ahead once again at the end of the third quarter thanks to excellent play by Yabusele (only one missed shot).

A nail-biting finish
The game was now wide open and it was clear that the triumph was going to be decided in the last few minutes. Despite two three-pointers from Causeur and Rudy, Thomas fired Bayern in front. Things started to go against Madrid with two technical fouls against Poirier and Tavares, who were sent off as the game entered the final stretch. Nevertheless, great defence and brilliantly taken points from Yabusele, Causeur and Heurtel ensured the Whites were still in with a chance (76-76). Yabusele then nailed two free throws and forced a turnover in the final 30 seconds. Llull secured Madrid's sixth win with two more free throws to take the final score to 76-80.
BAYERN MUNICH-REAL MADRID STATISTICS